Advice for using both OpenOffice and LibreOffice

I would like to use Dragon Naturally Speaking but as others have noted, it is not fully compatible with LibreOffice. So, I have been using it with Open Office, which is more compatible. I would still like to be able to use LibreOffice with the same files (when not using Dragon).

However, there appear to be some issues using both OO and LO with the same file. For example, I just opened a file with OO that I had been working on with LO. The font is supposed to be 11 points but in OO it is 18.

I would imagine that there are a number of such issues between the two programs and I am not asking for a description of all of the differences. Nor do I expect LibreOffice experts to have equal understanding of Open Office.

Rather, I would like to ask this: If people want to use both programs with the same file, are there some basic steps they could take to minimize incompatibility (such as minimizing the use of graphics)?

There may not be an easy answer to my question but thought it worthwhile to ask and would appreciate any thoughts.

Interesting example. The problem here isn’t that the two programs are different. The problem is this document, as explained in my edited answer.

Getting a handle on the differences is a moving target, because they may change with each new version. You could check the release notes, but they often leave out these kinds of details. Also, keep in mind that documents may behave differently based on operating system or locale.

Probably the only reliable way is to open the document in both and then fix anything that causes a difference.

Often it is enough to avoid using the latest and greatest feature that LO comes out with. But it sounds like that will not work for your particular problem since the document started out in AOO.

One issue I’ve dealt with is that new versions of LO use a different font rendering engine. This affects languages with complex characters such as Indic scripts. I do not know what steps could be taken to minimize this difference if you need to use those characters. The only way would be to export as PDF.

Macros can determine which one is used and then handle each appropriately. For example:

The problem with the document you have posted is that the styles are messed up. There are three styles named default in this document: default, Default and Default Style. Not a good idea. There can be only one! 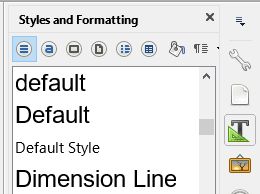 To fix this, open in AOO, right-click on default (lower case) and rename to default2. Then modify Default (AOO) or Default Style (LO) and set size to 11pt. The underlying name of both Default and Default Style is Standard, so it’s actually the same style.

This illustrates the answer to your main question. How to minimize these kinds of differences? By making sure the document doesn’t break Writer conventions.

Thank you so much for looking into this. As you may imagine, this is the result of pasting text from someone else’s document. Out of curiosity, what would happen if “default” and “Default” used the same case? Would there be a warning of the clash or would the native default prevail? Or would there be just two versions of “default”?

It is helpful to be aware of this problem. I would think it could happen frequently. Perhaps it is one of the things to look for when a file appears to be corrupt.
This is a good reason to paste text as unformatted, when possible.