[SOLVED]Why are there less pages and random gray boxes in my document?

As the title explains, I’m a bit confounded by this. I jumped on the opensource wagon recently because, honestly, ms word is way overpriced. As I’ve seen so far, ms word doesn’t do anything differently either. Enough about my conversion testimony anyway. Down to the source of my issue.

I’m a bit of an aspiring author and(while working on ms word) I wrote my manuscript. My computer, however, was past the point of repair so, after months of putting it off, I bought a new computer. This is when I decided to convert to opensource and leave ms word behind. I opened up my manuscript in libreoffice and saw a very large decrease in pages from what I remembered(my document is 773 pages in ms word as opposed to the 573 on libreoffice). I was a bit scared, as you may have imagined(I’ve worked on this manuscript for two years) but after revising the document, everything seems to be in order. I’m wondering why this is. Is it because of the formatting? If so, is there a way I could possibly return it to its original state?

Also, there are strange small grey boxes littered throughout the document after most sentences. Is there a way to get rid of them? The page numbers also seem to have been highlighted with a grey color so my assumption is that rather than gray boxes there are random highlighted gray spaces.

If it’s of any further help, after every sentence, I double spaced as protocol for a manuscript.

Thank you for taking your time to read this and I’ll be waiting for a reply.

Have a look into Help or the documentation on the web.

The gray vertical bars in the edit screen indicate non-break space. (You can manually create them in LibreOffice with Ctl+Shift+SpaceBar (or Insert | Formatting Mark | Non-breaking Space).

So, when the Word doc was converted to Writer, the converting routine errs on the side of caution and preserves the non-break space.

When the document is actually printed, there will be spaces, not the grey boxes. (You can see this in Page Preview (either by clicking on the “Page preview” icon, or Ctrl+Shift+O, or File | Page Preview).

When you type in new text, you can just hit the SpaceBar twice and Writer will know you want a double-space without having to sneak in a non-breaking space, so new stuff you type will look normal (no gray boxes).

The page numbers are in a grey box to indicate that those are the display values of fields in the document, in this case, the Page Number field. When previewed or printed, you will see just the number, not the gray box holding the number.

Thanks! This fixed the gray box problem right away.

To just avoid seeing the grey spaces (a very common occurrence when opening in LO or OO a document coming from MSO), go to View/Field Shadings 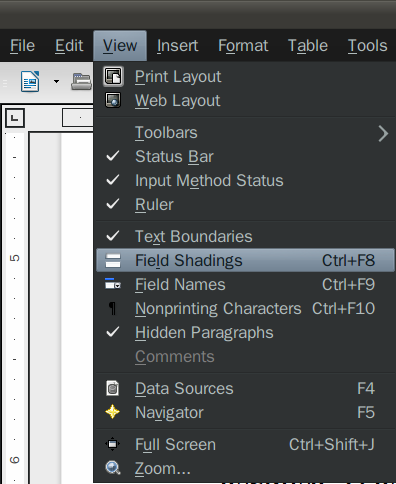 I opened up my manuscript in libreoffice and saw a very large decrease in pages from what I remembered…773 pages in ms word [vs.] 573 on libreoffice…Is it because of the formatting?

It’s quite possible that various differences contributed to this page discrepancy:

If so, is there a way I could possibly return it to its original state?

It’s possible that you could try to match all of the things listed above, tweak spacing, character kerning, etc… and get pretty close to the same layout metrics. Unless you have some specific need to match the old document so closely, I’d just let the text reflow as it will.

Also, there are strange small grey boxes littered throughout the document after most sentences. Is there a way to get rid of them? The page numbers also seem to have been highlighted with a grey color so my assumption is that rather than gray boxes there are random highlighted gray spaces.

I believe that the page numbers appear with a grey background to indicate that they are an automatically-calculated/data field.

If it’s of any further help, after every sentence, I double spaced as protocol for a manuscript.

Ahh… that looks like it corresponds with the grey boxes. Perhaps the grammar checker or some other tool is trying to tell you to stick with single-spaces? (I just tried using double spaces between sentences on LO 4.0.0.3, and no such grey boxes appeared for me)

Regarding the double-spacing, Wikipedia notes:

Much modern literature on typography says that double spacing is not desirable, but other sources indicate that it could be used on a typewriter or with a monospaced font. The majority of style guides opt for a single space after terminal punctuation for final and published work, with a few permitting double spacing in draft manuscripts and for specific circumstances based on personal preference.

It looks like you’re using a variable-width font, so I’d suggest that you try a single space. Either way, you can probably search-and-replace those grey squares to either the empty-string (to go with a single space), or to a regular space character (to go with double-spacing).

After you mentioned the “search and replace” option, I copied a single grey box and pasted it into the “find” tool. It seems like it was a character in of its own because after pressing enter to search for the next match(and a few matches after that) they were all gray boxes. I used find and replace, using the same character as earlier in the “find” section and using a single space(the one generated by pressing the spacebar) in the “replace” section, clicked replaced all and had a favorable-

result. Thank you for your help in regards to that matter. As for the formatting, I’ll tackle that problem later. I found the tidbit from wikipedia interesting because I was led to believe that the double spacing after each sentence was commonplace. I followed the advice shared by a published author and I was sure that was the only way to go. Guess I was wrong.(It’s also strange that these comments have a character limit. I understand thankyou’s are short things, but elaborate replies notsomuch)

66% bump and here I am complaining. xD Well thank you for that. I actually didn’t know I could just press enter to send my message. I was just trying to enter a paragraph break and it seemed like it wasn’t working. Anywho, a night’s a night. Hopefully I’ll be able to fall into a nice groove with my new software.

I’m not sure if you receive a notification with these comments, but on the chance that you do, I’d like to thank you again. Regarding the problem with the length of my document, it seems the problem was mostly due to the font I was using. My new computer didn’t have “Dark Courier” installed so after I installed it and re-opened my document, everything seemed like it was back in order. Thanks again!

@Eternal – thanks for the kind words! If my answer solved your problem, please mark it as correct so it will be resolved. Thanks!

(every time @qubit1 is mentioned in a post, I get an email update, so feel free to ping me that way

@qubit1 Will do! Thanks for all the prompt help. : D

@qubit1 Actually, another quick question. How do I mark it as correct? I only see the close/edit/flag as inappropriate options.

@Eternal, Take a look at the Answer to this question: How do I mark the best answer to my question on this site?