I have searched through the questions on an Excel ctrl-g (goto) equivalent for Calc, and have not seen the variant I’m interested in.

In Excel, when you type a ctrl-g, a dialog box opens which allows you to enter a cell reference, and then allows you to go to that cell.

I’m aware of the Address location and using F5 to bring up Navigator in LibreOffice Calc. That part does work.

But, there’s another aspect of Excel’s goto which I can’t seem to find in Calc.

Excel maintains a list of the cells you’ve gone to via ctrl-g goto. It automatically fills in the previous cell location.

So, if I enter ctrl-g in Excel, I get a dialog box asking for the cell reference. I enter the cell I want to go to, and click OK or press Enter. Excel takes me to the specified cell. If I enter ctrl-g again, the same dialog box pops up, but with the previous cell filled in. Ctrl-g will allow you to go back and forth between two cells without having to enter the cell address. There’s also no need to write any information down in order to return to the cell that you were previously working on.

A list of cells that have been used are also displayed, allowing the user to simply select from a list of recently used cells by the ctrl-g goto command. See the attached screen shot from Excel to see what I mean.

Noticing that the Address location had a pull-down arrow to the right, I was hoping that it would maintain a list of typed in addresses on a LIFO stack, but unfortunately the pulldown simply brings up another function.

Is there any way to perform this operation in Calc (jump around from cell or sheet to another cell or sheet) without having to write down previously referenced cells addresses? Naming the cells wouldn’t be helpful because every time I added a new record to the spreadsheet, I’d have to name the cells I’m interested in.

I’m a big fan of letting the computer do the work. Perhaps a macro can store previously-referenced cells and bring them up already filled in, or allowing the user to type in a new cell reference or address.

This would be a great feature to add to Calc.

use the name box, add a cell reference and click ok, go back to the name box and append a special character to the reference (eg. an underscore _), click ok once more and you get your list. 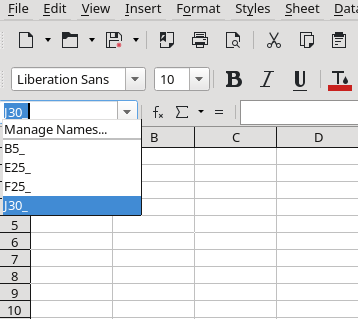 If you want to delete the list - use Manage Names from the Name Box drop down.

And “yes”, this is some kind of a misuse of Named Ranges.

If the answer helped to solve your problem, please click the check mark (

) next to the answer.

This doesn’t seem to work. I get a message “You must enter a valid reference or type a valid name for the selected range.”, or when the reference can be entered, like B10_, it allows the entry but it does not jump to B10. Items in the pulldown list similarly cannot be jumped to.

Do you think that a paste fake answers… and fake screenshots? You need to

Note also the shortcut key ctrl+shift+F5 to jump to the name box (and simply F5 for the full navigator dialog).

Or Shift+Ctrl+T to focus the Name Box.

OK, I’ll work with the person who asked me about this and see if this works for him. He balks at having to pay a boatload of money to Microsoft for his Office 365 subscription. I still wish this was more automatic, as ctrl-g does in Excel.