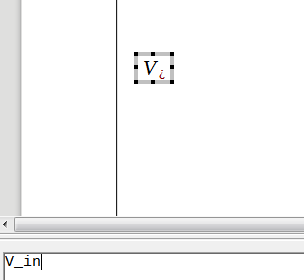 in is a keyword in Math; to use it as a literal, you need to put it in quotes; since it will make it look different (non-italic), you might want this: V_{ital "in"}.

See also : How to escape keyword in the formula editor

in is a keyword in Math, which is a set operation expecting two arguments on the both sides (before and after), so put in the formula as is, it shows you a question mark indicating missing argument.

When you need to put a name that is a keyword in Math, you have several options.

When you want to use it as a text

E.g., a comment inside a formula … just put all your comment, including what would otherwise be keywords, into quotes: "this is text in quotes".

When you want to use it as a function name

Functions (e.g., sin) by default have non-italic font. Turning Math keywords into function names also easy and logical. E.g., you wanted a formula like in(a, b): typed that way, it would give you ¿(a, b). To get what you need, you use func keyword explicitly telling that what follows is a function name, and should not be treated otherwise: func in( a,b )

When you want to use it as a variable name

Variables by default have italic font. Using keywords as variables is most tricky: there’s no syntax like quotes or a keyword telling that what follows is a variable. So below are workarounds with discussion:

@mikekaganski: Well, now it’s a full-featured tutorial.
How can we help users experiencing similar issues or just wanting to learn a bit more to find it?.

===
Can you imagine a reason for what my question Why is this site not structured better? was upvoted 11 times, and the answers have a total of 19 votes?

How can we help users experiencing similar issues or just wanting to learn a bit more to find it?

Posted as a FAQ.

\// Fascinating!
Will users consult it?