I have been experiencing an issue in LO Calc whereby typing new values in cells already containing a value causes a very annoying visual corruption affecting the cell only. The corruption seems to arise from the fact that the cell somehow isn’t cleared. See here: 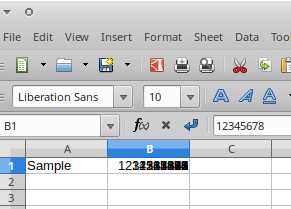 In the image above, cell B1 contains the value 1234567890, I attempt to replace it with a new value but somehow its contents aren’t cleared resulting in a very annoying visual corruption.

The purpose to question is simply to ask the community if this is a known issue and whether there is a fix for it? I’m using the Intel i915 driver on Ubuntu 16.10; latest stable version of LO. Also tried to run it with the gtk3 plugin but no change.

You neither told what version you are using nor on what OS / OSversion. These infos might be relevant.

Errors spoiling the view in very diverse ways once came along with bugs concerning the OpenGL rendering. Try to switch it off completely (if enabled) in ‘Tools’>‘Options’>‘LibreOffice’>‘View’ (and report here, please).