Did you know that you could also use APSO to Organize your Python scripts within LibreOffice?

In 2012, the original code for the “Alternative Python Script Organizer” ( APSO ) was written by Hanya.
Some adjustments to the code were made at that time by @Karolus.
In 2016, Hubert Lambert adapted the original script and made it into an .oxt extension.
The APSO extension is available on the French OpenOffice Forum, with an introduction text in French.

i tried to translate the original introduction text from Hubert Lambert into English:
( please forgive any errors in the translation that might have occurred, and correct where necessary… )

Good day to all,

[To follow up on this thread, and in particular the suggestion by Dude, i post here a part of the original message.]

Hanya, one of the most brilliant and effective contributors of the sections “Macros and API” on the English-language forum, has in 2012 proposed a script ( Alternative Python Script Organizer ) that enormously simplifies the management of Python scripts on OpenOffice or LibreOffice. I think this script deserves a far better visibilty.

To make it easier to use, i have adapted it as follows :

Once this extension is installed ( and the program is restarted just to make sure ), a new menu-item “Organize python scripts…” will appear in the submenu “Macros” of the menu “Tools”. 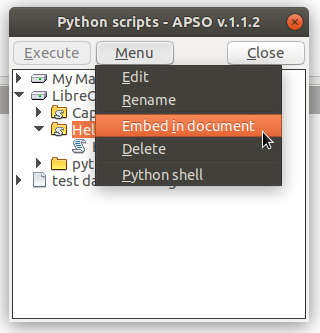 The button “Execute” allows you to launch the selected macro.

The available actions from the button “Menu” vary according to the selection, and they are :

This version 0.2, compatible with OpenOffice and LibreOffice, also includes the following elements :

To access these from a script, you must have at least once launched the python scripts organizer ( to load the path ) and insert the following line:

( and Of course installed Xray or MRI if necessary ).

For any suggestion, question or remark, the initial thread given above seems to me the most suitable place.

A big “Thank You!” to the author, co-authors, developers, and contributors who made the APSO extension come true!

.ClearContents(some flags) not working as needed
Importing BTC price to spreadsheet
How to execute a python function before XSCRIPTCONTEXT is available?
LibreOffice Calc 6 - "batch" hyperlink to files in folder?
Why is Java needed for running macros on Libreoffice?
Ratslinger July 31, 2021, 10:30am #2

@librebel The version on the French site is the same - v0.8.3. It it definitely worth mentioning that APSO provides an easy mechanism to embed Python scripts into documents.

Merci @Ratslinger, i added that last line as a precaution in case a newer version might become available in the future, in case when this thread is not updated with the newest version, and the French site is.
A propos… the APSO functionality should be integrated into LibreOffice.

Is it expected that the extension (v.1.1.2) requires Java to run?

APSO, and any future updates, is now available in LO extensions - here.

This is great, i updated the original post to include the new download link, and removed the old link to version 0.8.3.