I just installed Version 3.6.3.2 (Build ID: 58f22d5) on my Windows XP Pro SP3 system and have yet to find a way to get a double-line border to display correctly in calc. In past versions, I think the “Width” attribute was intended to specify the thickness of the line itself-- the gap between the lines was perhaps “scaled” to make sense. Or perhaps the line width was what was being “scaled” based on the overall border “width”. Which ever is the case, something appears to be broken now

Here is a png of a test spreadsheet I just created which shows cells with double-line borders of various “Width” specifications:

BTW- Here is a view with Anti-Aliasing turned off (thanks mariosv) and also a view using IBM Lotus Symphony.

With Anti-Aliasing OFF, some of the double-line borders do appear reasonable. But for the most part, the results don’t seem all that predictable based on the “Width” specified

FWIW- IBM Lotus Symphony also has an Anti-Aliasing configuration option, but either OFF or ON, the borders appear the same.

Regarding printing (export to pdf), for LibreOffice, the Anti-Aliasing configuration option had no effect:

Did you tried printing the file or zooming in?

If I zoom in on your file everything looks fine to me, see also attached screenshot: 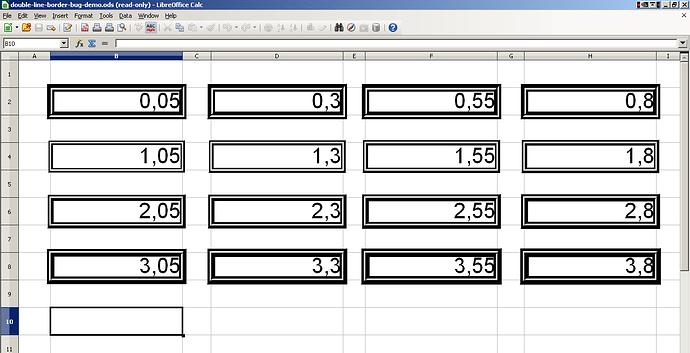 If that is not your problem, please explain further.

This is a problem for many years see here.

Goto Tools → Options: in Libreoffice - view uncheck “use Anti-Aliasing”. It worked fairly good for me.

Sometimes, changing the option in Menu/Options/Tools/LibreOffice/View - Use Anti-Aliasing, help.

After reading horst’s bug link, I have to agree that the bug being discussed in

is what I am experiencing. However, this is not a bug that has been around for years :(… I have been perfectly satisfied with all the versions of LibreOffice I have used until just now.

BTW- Since I was interested in a double-line border at the bottom of a cell to visually divide a column of numbers from their “total”, I merely created a very thin row and specified a thin, single-line top and bottom cell border. Both on the screen and in pdf form, the representation was correct.

fdo#53287 has been marked as a duplicate of Bug 56960 - FILEOPEN particular .xlsx shows cell border lines with wrong FORMATTING (too thick)