Font bug on LO 4.1 when opening documents created with LO 4.0

LO 4.1 on mac treats fonts differently than LO 4.0. Especially when dealing with fonts that have special “weights”. This leads to bad results when opening in LO 4.1 documents created with LO 4.0 that uses such fonts.

For example the Deja Vu font also exists as Deja Vu Light. In LO 4.0, it is displayed as a different font than Deja Vu. In LO 4.1, it is considered as part of the Deja Vu package. The images below illustrate this bug. 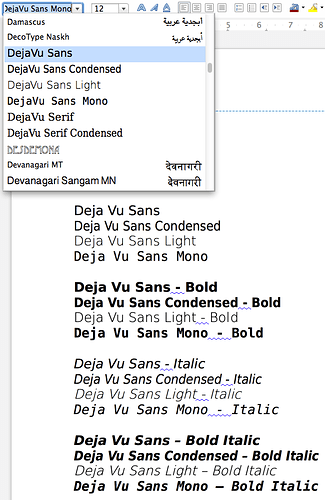 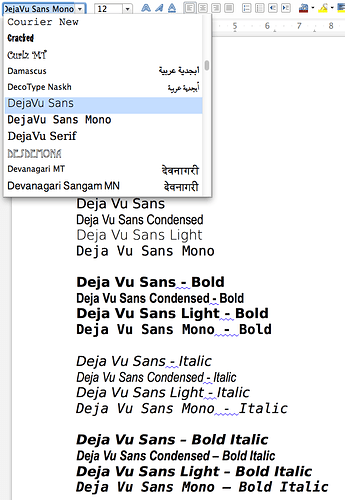 Should I file a bug report?

A similar question was asked before:

I have fonts missing after upgrading to 4.1 on Mac OSX Mavericks, what I can do? (In openoffice works) English

As I say, I upgraded LibreOffice to version 4.1 on a Mac with OSX Mavericks. I had several fonts that I have missing. I want to continue with LibreOffice, but I hate these things happen. By the way, I also asked to indicate new “environment java” What should I do? And could not we do the installation on Mac without having to go modifying permissions, as before?

How do you select font styles that are part of a font family but don't display in font selection window: i.e. Centaur Old Style?
I have fonts missing after upgrading to 4.1 on Mac OSX Mavericks, what I can do? (In openoffice works)
oweng December 13, 2013, 10:29pm #2

Please do not open a new bug as it is a known problem with many existing duplicate bug reports. This may be several problems rolled into one, as the font handling in LO v4.1.x for MacOS evidently has a problem with weights and there is a problem with LO-provided fonts not displaying. The two different types of problem appear to be:

[1] The originally linked bug (fdo#67744) has since been closed in favour of this report. I included fdo#67744 because the screenshots provided show this effect, so thought it may be related.

LibreOffice not recognizing fonts in OSX
I have fonts missing after upgrading to 4.1 on Mac OSX Mavericks, what I can do? (In openoffice works)
dwight September 17, 2014, 5:10pm #3

I’m on libreoffice 4.3.1.2., Mac OSX 10.9.4. Has there been any progress on this issue since 4.1? Is there a way for example to access the true italic typeface and not simply a forced oblique?

@dwight, it would appear that at present there are numerous problems with the MacOS build of LO (partly b/c Apple loves to change things all the time without concern for backward compatibility). In this instance (font handling) it may be some time before a resolution is forthcoming. Can you edit your answer to mention which font is offering a “forced oblique”?