Whenever I set up an equation in formula and use the bold command it creates a ridiculous amount of space between it, they are vectors so it has to be bold.

For example this equation here, the dD/dt, and that is with the nospace command.

Is there any other possible way to fix this or will I have to resort to another word processing software.

This is what I see, is it right? 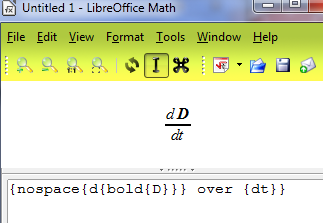 Yep, there is quite a gap between the differential of the numerator to the denominator. I’ve spent a few hours trying to make it look aesthetically pleasing and consistent with everything else, perhaps it might be a bug.

There are several open bugs associated with formula spacing. Some relate to italics, some to subscripts, some to line spacing, but none specifically mention bold text, although I imagine the treatment (problem) is similar to that for italic. The most relevant ones seem to be FDO#37016 and FDO#47352. Having stated that, this issue probably involves several factors.

Formula code writing style: In the LO Math v3.5 Guide the examples provided in the command reference (pp. 40-50) indicate a greater amount of spacing when writing formula code. On page 48 of the Guide the nospace command is shown in the form:

The latter is more in keeping with the style used in the question here, however the former is necessary for correct italicisation in some instances (refer FDO#55853). This has ramifications for the elegant treatment of derivatives and other compound expressions. Also, there is a certain amount of forgiveness with the treatment of spacing in formatting commands (e.g., nospace or bold) such that these produce the same output:

The Guide, help pages, and even the source code (starmath/source/command.src) have a certain amount of variability in presentation for function, attribute, and formatting commands. My overall point here is that formula code writing style can be a factor.

Font kerning: The choice of font affects how the same formula code is treated. Here is an example with the variables set in Times New Roman, and again set in Gentium Plus. The latter is far more appealing, with less spacing issues (although still not perfect). Your choice of font will affect output.

LO Math nospace effect: I am not sure how this formatting operator is treated or what ‘excess space’ is trimmed when it is used. There does not appear to be any difference between:

Perhaps it only affects certain combinations that introduce ‘excess space’ or have known spacing issues?