How can i bring back the old tab GUI (Specifically in Calc with sheet) in Libreoffice 6.3

Is there any option to bring back the good old tab layout in the libreoffice 6.3. I have eyes to i don’t need to see it better… and without the borders and everything it is very annoying (i am not the fan to colorize the tabs)… And with the bigger size of the tabs… There is smaller working area… So is there any possibility to bring back the old more usable sheets tabs layout? 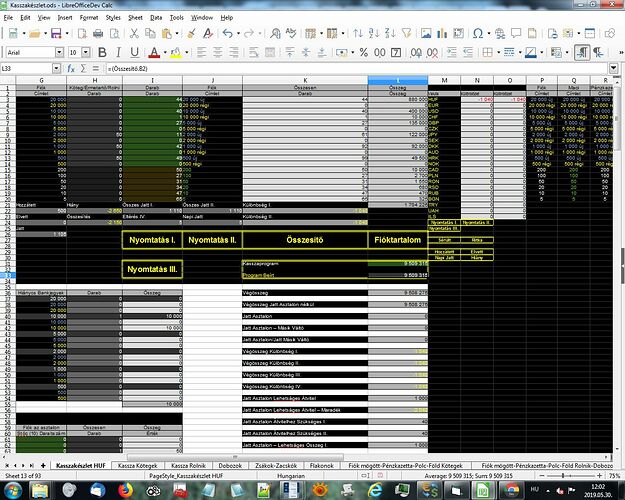 What you see is a work-in-progress.

Shoot me if in this case the newer is better… And i didn’t want to simply change back to the old… but as i said… for me the old is better in this case… So i want a settings option to revelt to the old layout… So everybody happy… Who like this new layout… and the people like me who more like the old one. win-win…

Work-in-progress means that what you see is not a final look - so nothing to discuss yet: see tdf#124572 comment 27. And having extra configure is a great burden to developers, creating a need to take twice more configuration combinations into account - so we need to try avoiding new configurations as much as possible: there’s the third side in your equation, which corrected form (taking developers into account) reads “win-win-LOOOOOOOOOOOSEE!!!”

As i see there is an option to display sheet tabs or not… Do you say it is much more complicated to extend it with the choose of the tabs layout? By the way i stick to the 04.16 version until this finalized…

No I don’t say that. I say that after initial trivial addition of the option, there would be two blocks of code for tab layout, which would require anyone who touches that code to understand both, and also understand when exactly each is executed, and much more. Which is a complexity increasing with each innocent little thing.

I use the version word because after that day changed the layout (for me). Simply daily master 2019.04.16.

A change to reduce tab size was merged on May 31st.

I’m with you, Necromancer. I just updated and hate the undefined tabs. There’s also no scroll bar for the tabs so you need to use the buttons all the way on the left side to look at your tabs scrolling from the right. And now I guess I need to rebuild my keystroke combinations because they aren’t working the same way (ie alt-i-r used to insert a row for me) I understand improving performance but why change the look and feel? It’s not better!

I see it much more simple… One block of code for old layout/one block of code for the new one (the code is the same but the GUI attributes an graphic elements are different) and top of it a block of code which execute what I set in preferences (Similar to IF syntax). So the debugging of the old layout is very easy as the developers has it and it hasn’t bugs because it worked fine. I think the new layout is a tweak of the old one so it mostly bug free too… The developers will have the task to coding the top controling block… I know it isn’t the easiest task but isn’t as hard as you say…