How can I configure the status bar?

My monitor resolution is 1600x900 so I have no lack of horizontal screen space, but with the Writer window sized to view the whole document at 100% zoom, the zoom controls on the status bar are truncated.

There is whole load of stuff on the status bar that I’m either not interested in, or which is already represented elsewhere.

Word count I really don’t need to see the whole time, it could either be configurable or at least get rid of the ‘Words (characters):’ label as that uses a ton of horizontal space and the readout isn’t really so complicated that I don’t think I can work it out.

Style field. What do I need that on the status bar for? It’s already on the toolbar.

Language field. I don’t change the language so often (ever) that I need that on the status bar.

Insert Mode: Fine I supppose it’s traditional, but it would be far better if it actually stated the insert mode instead of just being a blank field until I accidentally enter overwrite mode.

Modified field: Don’t need that on the status bar, Save icon on toolbar shows me if it’s saved. If another modified status indication is required then an asterisk marker on the document title is a better, more universally recognised alternative.

Digital signature and Zoom controls are fine, apart from the fact that half the time I can’t see them anyway because they are truncated due to all the other less useful stuff.

Can you reopen? I’d like to add an answer.

As I know, only view or not.

You can also hide the ruler: Menu/View/Ruler, and dock the toolbars/navigator/styles on the left or right side. 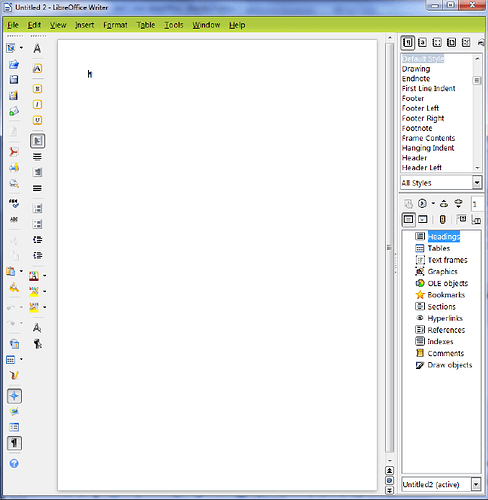