how do i paste absolute values, like paste special > values

When i use a formula - how do i paste absolute values, as i would useing “paste special” > “values” in MS excel?

I assume this doesn’t differ much from Excel.

Update - see screenshot (copying cell A3, moving to target A5 and Paste Special -> Number will add value 3 to A5 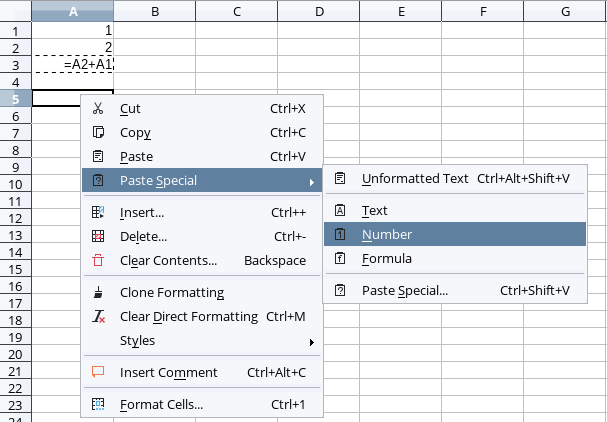 There is no obvious way of pasting the resultant value of a formula - ie cell contains =a1+b1 in excel I can copy the cell and use paste special … values to past the result of the formula ( but not the formula it’s self) or am I missing something.

Did you even try what I wrote - The procedure in my answer pastes the result of a formula and not the formula itself. That’s why it is called Paste special as it does in Excel. Please see Update in my answer.

See my answer - that works Ok.

how do i paste absolute values

Your answer answers something you did not ask.

The function used to be under Tools - Formula to Value

It has now moved to data - Calculate - Formula to Value

This is not an answer to what you asked - You asked about paste and this answer is about conversion of formula to values.

In Excel Paste Special Values converts the result of the formula in a cell to a value ir it removes the formula. In Excel you can paste ‘over the top of’ the selected cells thus removing the formula and ending with values. This is apparently not allowed in Calc. It appears that in Calc you can paste special - Values into other cells but not into the source cells.

As a result you have to use the calc function ‘Formula to Value’ if you want the result in the cells that used to have formula.