How to achieve WYSIWYG color translation between screen and printer?

I’ve defined a set of Highlight (text background) colors called Highlighters, used in a directly analogous sense as a set of highlighter markers when working with paper documents. What I would like to achieve, but am so far unsuccessful with, it getting a reproduction of those very light value colors in printer/CMYK space.

I was wondering whether anyone had found a recipe for getting a “WYSIWYG” correspondence between Highlight/text background colors as they appear on screen, and what you get in the printer output. In my experimentation so far, the output is always way darker than what I’m going for. Unfortunately, I’m not that knowledgeable about printers and CMYK, and always use my documents myself on screen, but did want the option for people to be able to print them out and have the look good.

There is no solution to this problem and it is way beyond LO.

Colour handling in computers is based on additive synthesis from three primary colours R, G, B. There are several models (colour spaces), each with its own primaries. For instance, NTSC and CCIR (former analog TV) cannot be converted exactly to each other because all their primaries are different; some colours cannot be represented in the other space.

Think of the primaries as defining a triangle with a specific point inside being called the “white point”. The standards define the coordinates of the vertices of the triangle (a gamut).

The standards for computers roughly agree on the R and B primaries and largely differ on the G primary. A popular colour space i sRGB which i contained inside ColorMatch, itself fully enclosed by Adobe RGB 1998.

That(s for theory. Now for the practice.

CRTs use electro-luminescent powders, but their triangle is not equal to the standard gamut: it is fully contained inside the standard gamut. Every maker has his own recipe for the powders; consequently, different brand CRTs won’t render a “mathematical” RGB the same. However, the white point can be tuned rather precisely thanks to analog settings in the electronics.

LCDs offer a much worse rendering because they use filtering. Everything start from a white light source (either provided by cold cathode tubes – CCTs – or by LEDs). This white source is rarely (never?) equal to the white point and you can’t adjust it because the spectrum cannot be tuned. Then you have filtering cells with coloured dyes obscuring part of the white light. Defining a dye bandwidth is much more difficult than making an electro-luminescent powder. The net result is the gamut of an LCD display is much smaller then a CRT one.

Another aspect to take into account is “amplitude response” (technically called the gamma). When you send an excitation to your display, the device responds approximately as x ^ (1/gamma). This can be partially corrected by sending the device a gamma table to compensate for the screen non-linearity. However, LCDs have a strong tendency to quickly rise to saturation. It seems difficult to have a balanced rendering between dark tones and light tones (the latter becoming preponderant). This fact leads to artificially darken a picture (which will then be badly rendered on CRT and also on print). Gamma correction is extremely difficult on LCDs because they are practically full digital without possibility to separately adjust the primaries (single white light source!).

Colour in printers is base on subtractive synthesis. White light is the paper, but there are so many papers and so many “whites” that discrepancy start here. Patches of ink are then deposited on paper and previous ink layers. Due to the subtractive nature, primaries are different from light emitting devices: CMY. Usually K (black) is added because the CMY combination results in a brownish tint. Once again, CMY defines a gamut and you can easily imagine this gamut is quite different from RGB.

The colours which transfer well to print are those in the intersection of RGB and CMY. All others must be artificially rendered in a false color (the closest on the boundary of the hexagonal intersection?).

There is also the problem of the inks. I guess CMY have a precise colorimetric definition but ink makers surely don’t provide the exact tints. And you also have divergences between makers.

An improvement has been attempted through printing with more than 3 (4 including black) inks. Driver processing becomes very sophisticated but colours still can’t be rendered exactly.

To circumvent this difficulty, device properties are recorded in so-called ICC profiles. Software can use the profiles to automate conversions, but conversions are valid only inside the gamut common intersections.

Final note: the 4k and 8k TV standards have defined a considerably larger gamut with primaries outside what the eye can see. I doubt that we can yet find screen conformant with this colour standard. This would solve the display part of the problem, but not the print part.

@ajlittoz, congratulate, a lecture for the college.
Then you could mention that the screen can be set in different brightness and contrast levels. The question also arises, is the paper really white?
In which light is it considered?
Your comments confirm, it is very complicated.

But I think that overwhelms every normal user.

The bottom line is: It does not work.

@Hrbrgr: on CRTs, brightness and contrasst controls adjust respectively the black and the white levels. Midtones can be adjusted through gamma but there is rarely a gamma control knob. On LCDs, I think contrast acts on backlight intensity while brightness must be handled with a complicated processing involving adjustment on the thresholds for the TFTs (not sure of that, but there is no way to act on the black level through the backlighting).

I have kept one or two CRTs for photo editing. I let them warm up for at least half an hour and I check the phosphors have stabilised with my GretagMacBeth sensor. I also work in a controlled ambiant light environment. I have learnt that if the picture looks weird (too flashy or dull), I must not try to correct it according to my eyes. The sensor is right and considering the characteristics of the rest of the chain (printer driver and printer), I’ll get predictable results.

Geez, sorry. No, there is no recipe or I do not know it.

Briefly to the theory: You can calibrate your screen and possibly also your printer. Whether the result is then satisfactory is questionable.

If it’s only about light or dark colors, I suggest the following workaround:

Make yourself a pattern table with small cells. Use your colors in one line.

Under this line you use the same colors again with a slightly lighter color gradation. So you can create several lines.

Print out the table and see what color brightness suits your needs.

Maybe someone else has a better idea.

See also:
I try to print a Draw document, but the colors printed by my printer are not the same as those displayed on my screen.

Settings to bring perceived brightness of printed matter close to what you see on screen are mostly in the “gamma correction” class, which is not the domain of LibreOffice. You can sometimes adjust this in the printer properties, but be aware that this will be “system wide” (affects all printing) and may hurt the print quality of some photo applications which keep track of their own correction schemes. Good photo color quality is perhaps more important than good highlighting.

The advice from ebot is most likely the optimal solution. If that makes highlighter colors too light or too intense to be workable on your screen, and gamma/color correction is available in your print driver, you could try to create a “highlighter” color profile for your printer so you can switch between “good profiles”, one for text/highlight purposes and another for photo printing. Making a “true” color profile may be possible, but not easy.

“Gamma correction” is an operation required because light sensor and light emission electronics generally do not have “linear response”. This usually makes very dark and very bright regions of an uncompensated image appear quite normal, while the midtones (where most of your highlighters will be) appear dark or dull. Combine this with the slight deviation in print inks’/toners’ coloration and print devices’ performance variations, and you can begin to imagine the difficulties in reproducing a “perfect image”.

For professional photo work you can calibrate the color response of a good screen, individually for each primary color, to match the source image fairly well. You can then calibrate the print device accordingly, for primaries individually, to match source image/display output fairly well. This is a challenging job, requires good skills, some equipment (or excellent color vision), and can still take a couple of hours to get it right. It still won’t be perfect, because the primaries for additive color blend (screen) are not the same as the primaries for subtractive color blend (print), and our eyes (the ultimate target) are dynamic, their sensitivity will adjust to the environment and will not always perceive the same blend point as “balanced” (i.e. “white”), in particular when one subject emits light (the screen) while the other reflects it (the print).

Screen colours are additive mixing. The light going into the eye is the surface light plus the added light coming from the LEDs. The colour is always lighter than the surface. They are defined by RGB values.

Print ink colours are subtractive mixing. The light going into the eye is the surface light minus the colours which are absorbed by the ink so they are prevented from leaving the surface and going to the eye. The colour is always darker than the surface. They are defined by CMYK values.

Only some of the RGB colours can be converted to the equivalent CMYK values.

LO carefully chooses its screen colours such that they have exact CMYK equivalents but, if you have designed your own colours, they probably do not have CMYK equivalents.

This is why photos cannot faithfully reproduce what you see. Those having lived in Africa will be familiar with the fact that photos of jacaranda trees are always disappointing as the colour is so poor. 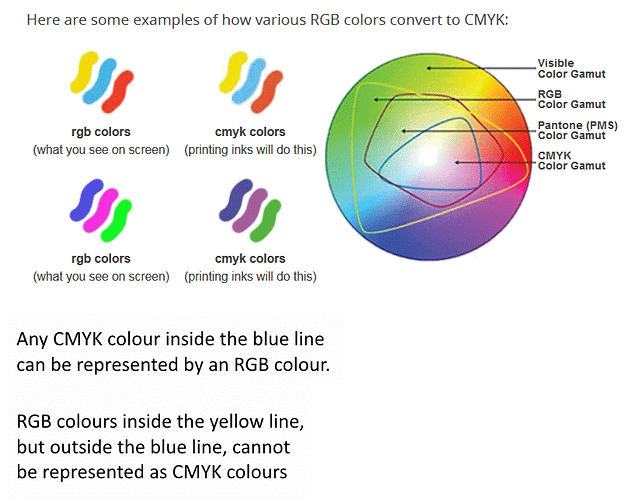 Just as a final follow-on, I got much better results by exporting to .pdf from Writer, then opening in Acrobat and printing from there. Acrobat seems to have better color management capability. The color matching is not exact, but I wasn’t expecting perfect translation from RGB to CMYK, but when printing from Acrobat, the general shading is much closer to the light highlighter type of thin shading overlay I was looking for.