How to get arrow and line in Callouts in Libre Writer?

I’m trying to create callouts that point to certain parts of text in Libre Writer. I can create the callout, add text, and wrap the text, along with changing the background to what I want. However, it won’t let me create a line and arrow to point to the text I want to point to.

The first picture is from Microsoft Word, which has the line and arrow that points where I want it to point.
The second picture is from Libre Writer and it has no line or arrow pointing to the text in the document. It just has 2 dots. The dots show because I have highlighted the callout. When I click off the callout it just looks like an ordinary Text Box, losing even the two dots.
The third picture shows that I have chosen arrows in the “Line” context menu in Libre Writer, but the arrows and line never appear. I did similar in the “Arrow Styles” tab as well.

How do I get the line and arrow to appear? I appreciate your help very much! I started using LibreOffice this week in an attempt to wean myself away from Microsoft Office.

I think this is a good question which also includes pictures - CAN I GET AN UPVOTE IF YOU THINK SO? (this karma thing restricts a user who wants to get involved with the Libre Office community). 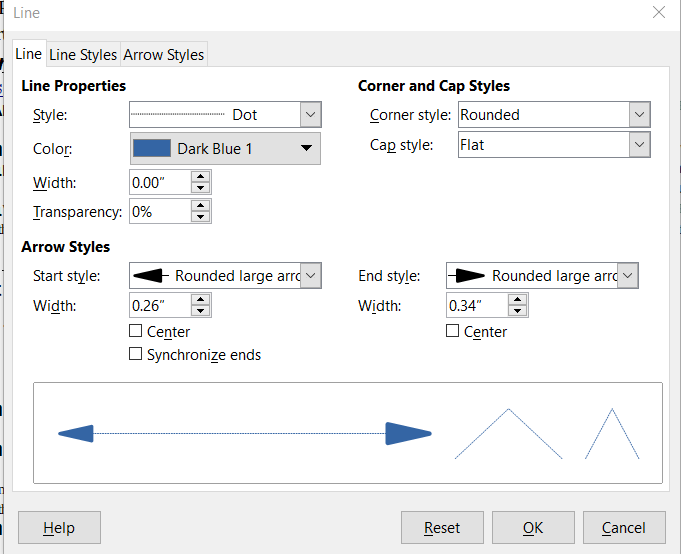 Thank you, Earnest! I had changed the line width previously, but that just makes the box around the text box larger, so I reset it back to zero. It doesn’t help the arrow and line at all. I appreciate your comment!!

Sorry, I got called away.
Under “Arrow Styles” in the “Line” tab, I have both “Start style” and “End style” set at 0.34" and no arrow or line for the arrow shows. I wonder if I have some strange setting in the Options. I’m looking . . .
Well, I didn’t find anything in “Options” that would help this. I have to wonder what other “gotchas” I’m going to run into with Libre Office.

You need to set a line width. The line is not just for the callout surround but also for the line that points to the object of the callout.

I used Line Callout 2 and opened the Line dialog from the right-click context menu. I set the line colour to dark blue and fine dots, the width I set to 0.25 mm (0.01"). From the context menu again I set Wrap to Contour for this case. 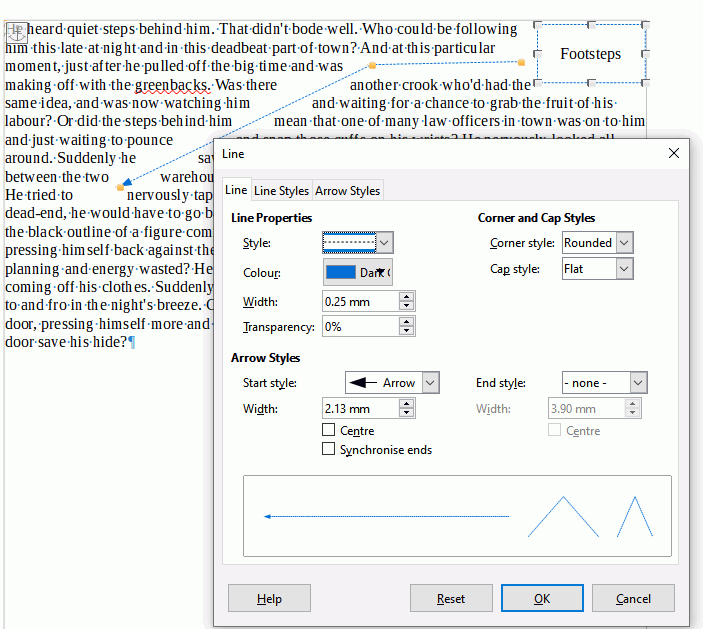 Note that I could have also set the line width by points and added an arrow head in the sidebar settings. Cheers, Al

I appreciate your comprehensive help. I set mine to mirror yours but I’m still having no luck. And now I’m having trouble wrapping the text, where I didn’t have trouble before.

Your screenshot appears to show a problem with your fonts, is the font installed?

Did you create your document and callout in LO, or was it created in Word first?

Maybe, you could try turning off OpenGl or Skia in Tools > Options > LibreOffice > View and see if that helps.

@EarnestAl: to the best of my knowledge, such arrows and text boxes are graphic objects. They are usually anchored to paragraph (or character for finer grain). But they are “frozen” to their state at time of insertion.

The text box (or, better, text frame) could be positioned in a page corner with the arrow linking the text box and a specific word. It is then expected that possible change in word location will change the “geometry” of the arrow. Unfortunately this is not possible: the arrow would need two anchors and should react to anchor relative movement.

Have you an idea about this issue?

@ajlittoz Having played around a lot with callouts today, they seem to promise more than they deliver. Your suggestion is what I would expect from name.

I couldn’t change the anchor point of a line or a callout to anchor to a character, it stuck to the first character of the paragraph. It is difficult to align the subject of the callout to the callout.

On the other hand, the callout in Word 2010 had similar problems but it did word wrap the text in the callout without intervention.

Another curious thing too, if I insert a callout and right-click on it, in the context menu there is an option to “Add text box” which would solve the word wrap problem. Oddly, that “text box” could not be grouped with the callout which is peculiar because they should both be Drawing objects and able to be grouped. I am pretty sure that “Add text box” adds a frame, not a text box (they can be grouped and sized together using a text box from the main menu).

@EarnestAl: anchoring To character is very troublesome (to set first and a real nightmare to change later) because it very easily reverts to To paragraph = to first character. I speak from experience.

Drawing tools in Writer are poor substitutes for Draw, which explains the grouping limitations. In general I design all my illustrations in Draw and paste the result in Writer. But this does not solve the callout problem.

Comments vs. callouts: IMHO comments are not intended to be part of the final (printed) document while callouts are similar to pictures and should be kept. Anyway, they don’t look good for my taste. At least, I find them ugly in text while they can be handy and acceptable in drawings (then no problem to manage them in Draw).

Wow! There are some excellent comments here! I’m working on wrapping my head around them.
I should have said that my document was created as an ods Libre Writer document, but everything was copied and pasted from my document made in Microsoft Word 2007. I don’t know if that makes any difference. I’m on Windows 10 as well. I will try different fonts in case that is a problem.
I’m seeing some great questions and comments as I look around in this forum, but it is frustrating that I can’t UPVOTE anything since there is no way to get 5 votes for myself in order to do that.

@NystaCU: you’ll get karma points by regular participation on this site. See this chart.

Accepting an answer here will reward you 2 points. Closing it will also grant you some points (2 if I remember right) but this will prevent the question from being improved or further commented.

Consequently, just ask another (relevant) question, accept it and you’ll be done with 5-karma.

Thank you, Ajlittoz! So there is a way to get points after all. I’m not closing this question yet as more excellent comments may come. I appreciate everyone’s help!

Comments shouldn’t appear except maybe in a working document, which this appears to be. A callout with the same ability as a comment could be useful.

Personally, I use text and a normal line in Draw instead of callouts as I can constrain the line to multiples of 45 or 90 degrees which looks smarter if there is more than one label per diagram.

Earnest, using a text box and a normal line may be what I need to do. Perhaps that is my answer instead of using a Callout. I want to thank you and the others for your help in this matter!
I hope I correctly marked your answer as “the Answer”.