How to insert special character by searching unicode name?

When you want to insert a special character, you need to select it from the character chart in the dialog. But the chart has many sections, and some sections are long.

So it’s a common Situation that you look for a character, but have no idea where look for it.

But of course you know a name for it.

And all characters in Unicode have very descriptive name.

Obviously it would be useful to search for characters by name now!


For example, you may need a recycling symbol, like “

You do not need to know the full name for a search. Just part of one word would find it, together with some similar symbols:
A search for “recy” could turn up “

” together with 10 similar symbols, like the white “♲” and “♸”, the recycling code for polystyrol.


I have seen this feature somewhere, but don’t know where - I do remember that it worked really well.

Now, my question is:
Is there a feature in LibreOffice that allows the search - even if it’s not where I would expect it?
Otherwise, do you use or know an alternative solution, maybe involving OS features or external utilities?

Hi - AFAIK you cannot use name to search special character with LibreOffice.

If you’re on Windows, the Accessory System Tools Character Map makes this possible.
My interface is in French, so I’m not sure of the English translation but it must be close.

Check “Advanced View” to have a search box. Note: the search is done only in the selected font. 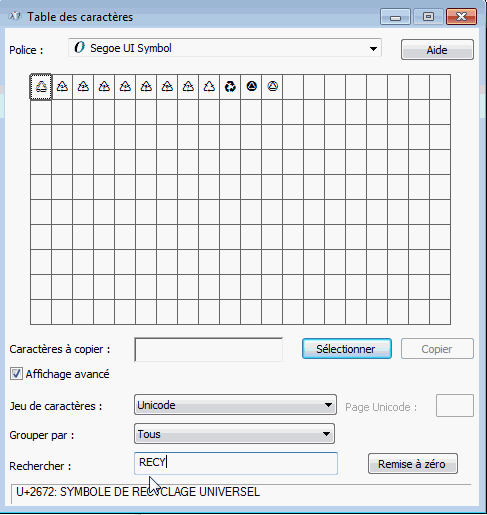 So you can select & copy…

Look at my answer at: How to insert special character by searching unicode name if a Linux system is being used.

In LibreOffice Special Character there is no Unicode search option. Therefore use kcharselect or character map. One is from KDE, the other from Gnome.