Prior to upgrading Libre Office to 6.4.3 I could create a text box in Draw and then give it a name by navigating to “shapes => name”. I might have the menu navigation sequence wrong but it was a fairly simple-to-find option to name a shape/text box under one of the top level menus. Now with Libre Office 6.4.3 I can’t figure out how to name a text box in draw. If I open a file created with previous versions of Draw I can see the named text boxes listed in the Navigator.

How do I go about renaming an existing text box or naming a new text box in 6.4.3?

Concerning names for shapes the behavior is bad, imo, but it was never basically changed (since the times of OOo): Shapes don’t get an automatic name, and unnamed shapes aren’t shown in the navigator.
What was changed over the LibO versons (in more than one step, and without an apparent rationale, imo) was the way to access the dialog for giving or modifyimg a name.
Top place this under Format, and no longer to give access via the context menu is probably not the best idea, imo.

Unnamed shapes do get an automatic name, e.g. Shape 1, but don’t appear in the Named shapes list. They appear if you change from Navigator default view of Named shapes to All shapes.

I use names to access text boxes programmatically to update text boxes with data.

Unnamed shapes do get an automatic name, e.g. Shape 1, but don’t appear in the Named shapes list.

What there is shown aren’t names but rather useless labels created on the fly. None of the LibO versions I tested with (including v7.0.0.0.beta1) even made these labels usable for linking to the respective shapes in the sense of making them selected on click or doubleclick.

On the API level a shape has a property .Name which is empty after creation, and doesn’t get assigned the fake ‘name’ like Shape 1 mentioned above. A second related property (.LinkDisplayName) also is empty initially and remains so if not explicitly changed.

Only actually assigned names are usable in the navigator.

PS: If you use that quite often you may want to customize the context menu (right click) when editing text boxes. 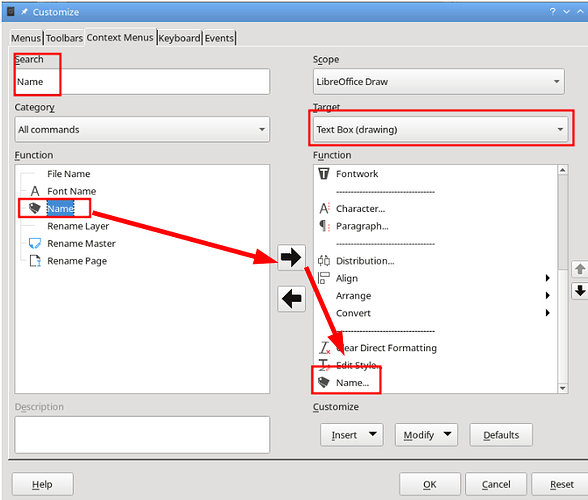