I am using LibreOffice to create presentations but repeatedly find that, when I save an Impress .odt file with a modest number of slides (say 20), the program freezes and I get a warning message whether to quit or wait. Waiting rarely does anything, so I have to quit LibreOffice and restart, often losing the slide I was working on. This happens so often that LibreOffice has become quite painful to use, which is most frustrating because it is a great piece of software when it works.

Has anyone found a way to prevent this freezing?

Others have suggested using completely new LibreOffice profile, which I have done but I still get the freezing (and only when I save the file).

The few times I have tried to edit the same.odt file on my laptop with 8 GB of RAM and using an Intel HD Graphics 5500 chip, also running the same latest versions of LibreOffice and Ubuntu, I don’t get any freezing, which makes the NVIDIA drivers a plausible explanation.

But so many people use NVIDIA cards and LibreOffice has been around so long, surely someone has figured out what is causing the freezing and knows how to avoid it?

Any suggestions would be much appreciated.

The few times I have tried to edit the same.odt file on my laptop with 8 GB of RAM and using an Intel HD Graphics 5500 chip, also running the same latest versions of LibreOffice and Ubuntu, I don’t get any freezing, which makes the NVIDIA drivers a plausible explanation.

First of all Linux seems to have problems with NVIDIA drivers, that obviously causes problems on LibreOffice. In future that problem could (!) be solved by NVIDIA Releases Open-Source GPU Kernel Modules.

Hi,
This page https://www.linuxbabe.com/desktop-linux/switch-intel-nvidia-graphics-card-ubuntu explains how to switch between Intel integrated and Nvidia graphics cards under Ubuntu.
Maybe could you follow the instructions, then switch to Intel card, and save your Impress file. If OK, this would confirm the problem comes from Nvidia drivers, and you would have a workaround.
If not, you would have to find the solution elsewhere.
Regards,
MN

Thanks very much for your comments and suggestions. I will try this and see if the freezing-when-saving problem goes away. (I also tried buying a cheap AMD Radeon card with its public drivers but could not find a Radeon card that would work with my now 8-year-old Intel motherboard.)

But a comment worth making is that I think there is a serious bug in LibreOffice that makes it not work well with NVIDIA cards, it is not just NVIDIA’s fault.

I use a large variety of graphical programs in Linux with my NVIDIA card and Ubuntu, some commercial programs like Mathematica, Matlab, and Softmaker Office, many in the public domain like Gimp, Inkscape, Thunderbird, etc and LibreOffice is the only program that causes trouble. So I think there is some code in LibreOffice that, if fixed, would make LibreOffice robust like these many other programs. In particular, why does the problem only occur when using Save or Save As, versus the many steps used when putting an Impress file together?

A follow-up: I tried switching my desktop computer to the Xorg Nouveau non-proprietary driver, to see if that would fix the problem, and that turned out to be a mess because, after rebooting, Ubuntu could not detect my computer monitor details and defaulted to 640x480 which made working not possible. (Is this a bug? Shouldn’t the Nouveau driver detect and use the full screen resolution, which is 2560x1440 for me?)

Even worse, the graphics drivers panel brought up by typing “software-properties-gtk” to switch back to an NVIDIA driver would not accept mouse commands, so I had to reinstall the appropriate NVIDIA driver by typing “sudo apt install nvidia-driver-515” and rebooting.

Hi,
I use LibreOffice 7.3.6.2 (downloaded from LO website) on Linux Mint 20.3 (based on Ubuntu 20.04 LTS). My computer has an Nvidia Geforce GTX 560M, it is the only available graphics card (integrated microprocessor card has been inactivated by ASUS computer manufacturer, “pre-Optimus” technology), it uses Nvidia drivers (390.154) and LO works fine, without freezing, using hardware acceleration…
So, I don’t think there is a “general problem” with LO and Nvidia cards and drivers.
Regards,
MN
PS: if you are convinced there is a LO bug, you should report it to Bugzilla (free user account needed) in order to have a chance it is corrected.

Thanks for sharing this information, appreciated.

After failing to see if the Nouveau driver might solve the problem, when I switched back to an NVIDIA driver I tried a more recent version of the driver (515 vs 470), and unfortunately found that this more recent driver did not solve the problem, still getting freezing. Will next see if I try a Radeon card to see if getting away NVIDIA drivers helps.

Hi,
Did you try to save your impress file after having switched to your Intel graphics card ? What happened ?

I did try changing the NVIDIA driver to a more recent stable version and that didn’t work. I also tried changing to the Nouveau public driver but must have done that incorrectly because, upon rebooting my system, Ubuntu didn’t recognize my monitor and the graphics defaults to a 640x480 screen that would not allow me to change the screen resolution.

So still haven’t found a way to fix the problem. I have also tried using the Softmaker Office suite, a commercial program that is highly compatible with Microsoft Office and that runs just fine on Ubuntu, but it is substantially inferior in its capabilities and usefulness compared to LibreOffice.

Hi,
Since your computer has an i7 chip, there is a graphics card on your microprocessor chip.

Depending on your computer, this card, called “integrated” is activated or not.

To check if it is activated, you launch your “Nvidia X Server Settings” application.

If your screen shows that “Prime Profiles” exist, then you can select Nvidia or Intel modes on the left, as per the following screen capture:
https://www.linuxbabe.com/wp-content/uploads/2016/04/NVIDIA-X-Server-Settings_014.webp

In that case you could switch to Intel mode before saving your impress file.

Do you have Prime Profiles in your Nvidia X Server Settings ?

Thanks for taking the time to provide some further help.

My NVIDIA settings screen does not show a Prime Profiles (see attached screenshot), so I am guessing this means no Intel card to switch to, right?

And by chance, do you know if the non-proprietary Nouveau driver works fairly well in terms of recognizing monitors, doing 2d and 3d reasonably well (even if not fast)? I used the Software & Updates tab Additonal Drivers to switch from Nvidia to Nouveau but, after rebooting, found that the screen had defaulted to 640x480 and Ubuntu couldn’t recognize the monitor nor let me change any display details. I though Nouveau would be a straightforward replacement for the NVIDIA drivers. 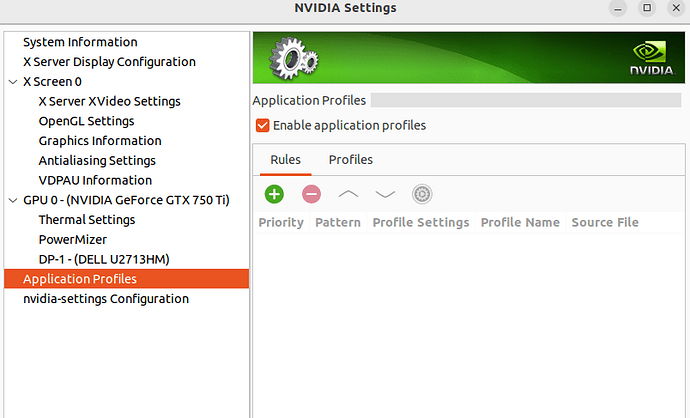 Yes, since you don’t have prime profiles, the only card in your computer is Nvidia one (your computer manufacturer decided to not use Nvidia Optimus technology allowing to switch between cards).

I don’t know the Nouveau driver, since I don’t use it (I have no problem with LO and my Nvidia card).

If you would want to install it you should:

The graphics drivers PPA, an “almost official” one, has the freshest versions of Nvidia drivers available for Ubuntu

If you install it :

And, when new versions of the driver will be compiled for Ubuntu, you will get them automatically, a few weeks before they appear in Ubuntu repositories.

Note that I am still not convinced the problem is related to Nvidia graphics card.

You could try the following workarounds :

Note that, if the problem stays unsolved with LO, you could try Apache OpenOffice ; its latest vesion is 4.1.13, released on July 2022. You might be able to save tour impress file.

Thanks again for taking the time to provide this help.

I had not used the Nouveau driver previously but so far, after switching to the Nouveau driver, I have not had a freeze with LibreOffice after using it for two days of editing some Impress files, and usually a freeze occurs with that much use. Will see if any freezing occurs during the next few days. For most of my daily needs (browsing, editing documents and code, watching some video files etc), Nouveau seems about as fast as the NVIDIA 515 driver.

I will try your suggestion and see if the latest 515 driver also eliminates the freezing problem.

I had already unchecked hardware acceleration in LO with the 515 driver and that did not fix the freezing problem.

My presentations do include images and I have not tried compressing them in the past. But my .odp files are modest in size, the biggest is about 10 MB.

Interesting suggestion to save in an alternative format like .pptx, that did not occur to me. Will try that also.

And your suggestion of using Apache OpenOffice is a surprise, I thought that version had died out many years ago because of the popularity of LO.

“And your suggestion of using Apache OpenOffice is a surprise, I thought that version had died out many years ago because of the popularity of LO.”
Yes, OpenOffice is still there; there are few developers, and few new things; however it is still maintained and updated, mainly for bugs correction.
Years ago it has been my “backup” solution for two years, the time for LibreOffice to correct a memory leak bug that prevented me to use writer with several tens of images.
Regards,
MN