Making a presentation in Impress (7.1.6) and using the photo album tool (Insert → Media → Photo Album), all images which are longer (vertical) than wide (horizontal) are automatically being rotated (mostly images taken with a smartphone, with a 9:16 aspect ratio instead of 16:9) on the slide (slide aspect ratio 4:3, one image per slide). Hence, all images which are longer than wide (let’s call these “vertical images”) are twisted, although I want these to be on a slide just as they are.

Is this a bug or is there any setting to let the photo album tool not rotate vertical images?

Also, when using the photo album tool all new slides are generated at the end of the presentation. Is there any way to let the tool insert the new slides after a certain slide?

There is a setting in smartphones which embeds rotation information in an image but mine shows a Unknown in EXIF data
The digital camera always recorded rotation information and EXIF shows Top Left (1). In XnView. If I do nothing except save that image in XnView it imports as displayed, for my sample that is portrait.

It seems that Impress reads this information to rotate image from the data embedded within the photo. I assume there have been different standards and only some are applicable/current.

Editing the image will probably remove the rotation data depending on the software. This is a good option anyway as smartphone photos are way too big for the needs of a presentation. Probably, for full slide a size of 1360 x 768 is perfect, remember that the projector can only handle up to certain size anyway so your display computer will be scaling anything larger down.
Find a image editing program that can batch scale and save as copies to another location so you can add them into Impress easily.

It indeed seems to be an issue of automatic rotation by a lot of software based on the EXIF orientation tag in the picture. All pictures taken by a (relatively old) photo camera which are in portrait orientation (more long than wide) are automatically rotated to landscape when using the photo album tool in LibreOffice Impress (7.1.6). Since these pictures are automatically shown rotated on my computer (Ubuntu Linux 20.04) in the correct orientation (portrait), I wasn’t aware of this EXIF tag.

A kind of solution, after creating slides with the photo album tool, I manually deleted the pictures which are rotated to landscape but which should be in portrait orientation and then inserted these again (Insert → Image). A dialogue box as follows appears: “This image is rotated. Would you like to rotate it into standard orientation?”. When choosing to do so, the picture is correctly inserted on the slide, in portrait orientation. When using the photo album tool in Impress, this dialogue box doesn’t appear. Hence, maybe this is a feature request, in case the photo album tool of LibreOffice Impress will be updated.

Probably the mentioned XnViewMP (works on DEB-Linux as well as on Windows) can solve your wishes by batch conversion. See screenshot. 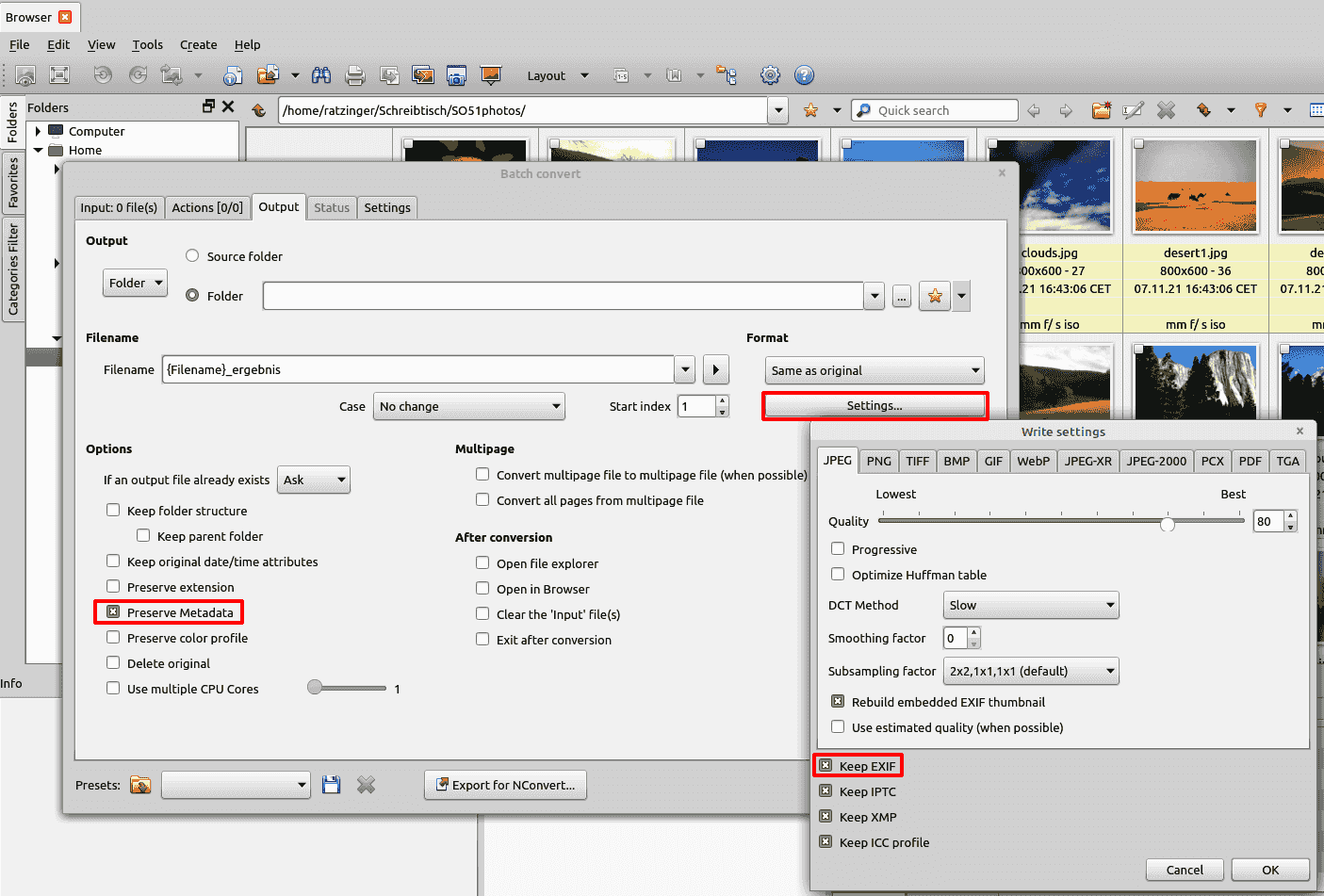