Running LO 7.0.4.2 on macOS. Trying to assign keyboard shortcuts in Writer to cause the window to scroll to the top of the next page. Setting aside the fact that LO insists on putting the top of the page where the cursor lands at the middle of the screen, rather than at the top, what keys does this pair of symbols denote? 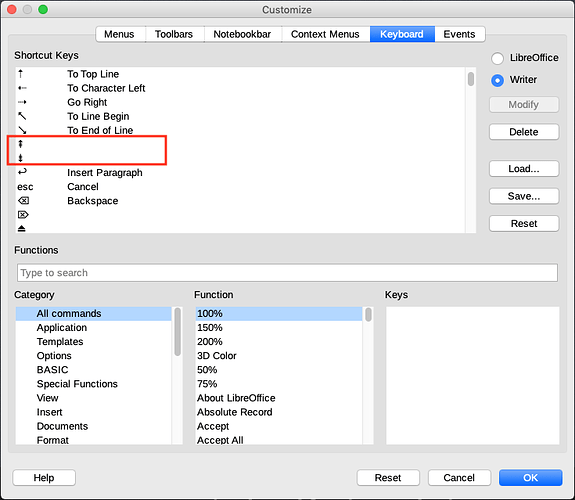 It looks like the packagers for MacOS have customised this dialog. Have you such an engraving on your keyboard? I think this a conventional representation of Page Up and Page Down. On some laptops, access to these functions needs the use of the Fn key with another one (probably Up Arrow and Down Arrow).

@ajlittoz: Thanks for the suggestion!

Unfortunately, I don’t have any such symbol on my keyboard (standard MacBook Pro). I do have an external Apple extended keyboard that has the PgUp and PgDown keys—but pressed by themselves, those don’t work, either. The only combination that seems to do anything is Cmd+PgDown, which gets me into the footer on the page where the cursor happens to be. My Customize menu shows this is indeed Cmd+(squiggly down-arrow)—so I think you’re right about that.

Even setting aside the fact that I’d need to drag along my external keyboard everywhere if I wanted to be able to use the PgUp/PgDown keys, though, this is still a pain. I can map “To Begin of Previous Page” and “To Begin of Next Page” to, say, Shift-Cmd-PgUp and Shift-Cmd-PgDown. But both functions insist on scrolling the display so that the break between pages appears in the middle of the screen, rather than at the top—even if I’ve scrolled so that the top of the page is at the top of my window beforehand. Very irritating.

This does not look like a definitive solution to your problem. I suggest you use your more link (only you as “non-answer” owner can see it) to “repost as a comment”. Thanks for adhering to site policy (Question & Answer, not forum).