Ok, I followed those steps. I will post the data from the registry key in two separate comments because of the maximum character limitation per comment.

Pastebin.com is the number one paste tool since 2002. Pastebin is a website where you can store text online for a set period of time.

Just now, I have this when upgrading 7-zip: 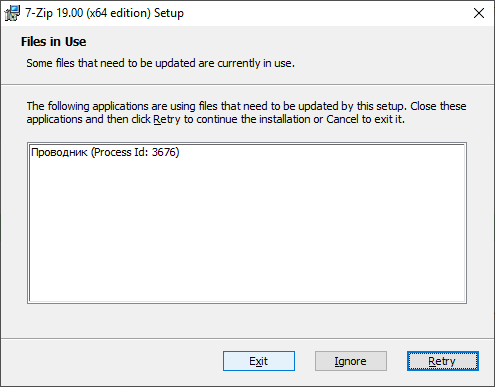 It tells to close Explorer. Just saying re:“no other software does that”.

In your last data I don’t see anything related to LibreOffice files, so can only suggest that you might want to cleanup your MSI folders - possibly you simply have stalled data from previous installs?

This flaw/bug still exists in LibreOffice_6.2.5_Win_x64.msi which is the most recent version as of today.

Sorry to hear that the 7-Zip installer has a flaw similar to this flaw still present in the LibreOffice installer.
I don’t think I wrote “no other software does that” though. I wrote that it is “nowadays unusual for installers in Windows to require closing other applications and/or rebooting”.

This problem still exists in LibreOffice 6.3

Just wanted to mention this here:

The requirement to reboot is normal in some circumstances. It isn’t universal among all installations of LibreOffice worldwide; and those cases where it consistently is, is possibly specific in some ways, like having some specific software, or configuration, or … - so unless people “suffering” from that try to debug that to make it reliably reproducible on developers’ systems, nothing will ever be done here.

This problem still exists in LibreOffice 6.4

Reply to Mike Kaganski: The fact that Visual Studio (a tool for software developers rather than the general public) may in some case require a reboot after installing an VC+++ Redistributable package update is very different from the issue tracked here. LibreOffice is installed by end users. Forcing them to close their web browser and possibly reboot is bad installer design. It is weird of you to try to make excuses for that by pointing to other software. Also, I haven’t claimed that anyone is “suffering”. It is unprofessional of you to repeatedly in this conversation twist my words like that. Can you please stop doing that?

I have to agree, it’s annoying and potentially confusing. I’ve just upgraded to 6.4.0.3, and installation process stopped twice with that dialog. Opted not to close FF (“reboot required”) both times, yet there’s no reboot prompt when installation ends. OK so it’s actually not required? Then why interrupt installation process when there’s no error? No other installer does this, they just silently continue and then prompt to reboot when it finishes. With LO’s update frequency, please make user experience as smooth as possible and don’t dismiss this issue.

I’m sorry to report that this problem still exists in LibreOffice 7.