Must all Basic calc macros be in "Standard?"

I’m creating a macro. I’d like it to be in a separate library than “Standard,” But my calc document can’t seem to find it.

I create a simple macro in the Standard Module1:

If, however, if I create a new library and put the identical code into a module there, I just get #VALUE!.

But that error implies that calc at least knows that function exists. If I change the cell in my calc csheet to =TESTX(), instead I get #NAME!.

So obviously calc recognizes the name, just for some reason won’t run the macro.

I’ve set macro security to allow everything, and that doesn’t help. So that isn’t the issue.

Have you loaded the library ?

User defined Basic functions for spreadsheet formulas need to be stored in the “Standard” library of the document or the global one.
Real spreadsheet functions with documentation and localized parameter names appearing in the function wizard need to be written in a real programming language and wrapped into an extension package.

Looks like I’m stuck putting everything into the Standard library.

I would have preferred using a “real” language like Python, but the contortions needed to do that presented more of a learning curve than I was willing to climb.

I still find it odd that LO appears to know that the function exists, just can’t figure out how to load it.

Put this macro into the Standard Library (that will be loaded automatically), and then assign the macro to some Event what will be raised after launching the of the Calc application.

Otherwise you can load a library by the UI, manually: Just click on the icon near od the Library name in the StarBasic IDE. The yellow ones are loaded. And use one of the excellent Object Inspection Tools: XrayTool or MRI. 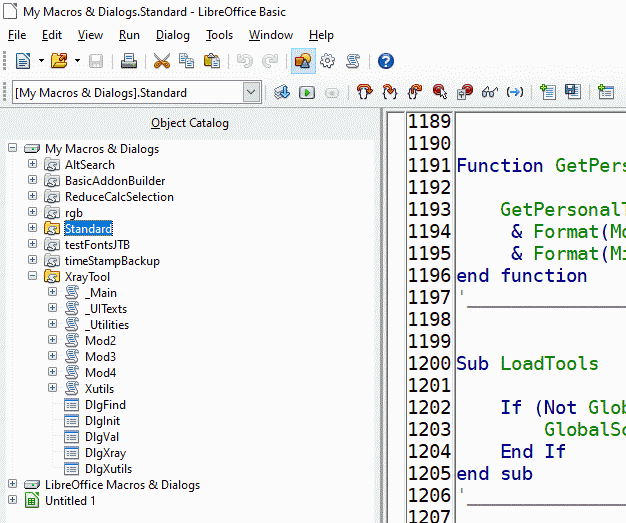 Otherwise you can load a library by the UI,

(The manual load works for me with the XRAYTOOL extension. Sometimes I load it by code, and sometimes manually. But: that uses a Sub instead of a Function.)

This is a bug. The respective code is wrong, assuming that pObject->GetParent() necessarily means “document BASIC”, and taking the parent’s name as the document, which will be passed to SfxObjectShell::CallBasic. But when the library is not “Standard”, the parent of that “non-standard” library is the “Standard” library … and the call fails.

You may file a bug report.