As an altenative, instead of a letter, add a decimal digit; i.e., 235, 235.1. They all will be numbers, and you can sort them.
Additionally you can format those cells with a space (000_m), and create a personal style to apply with conditional formatting (Formula is A1-INT(A1)>0) to display the decimal place.
See sample file (9.5 KB). 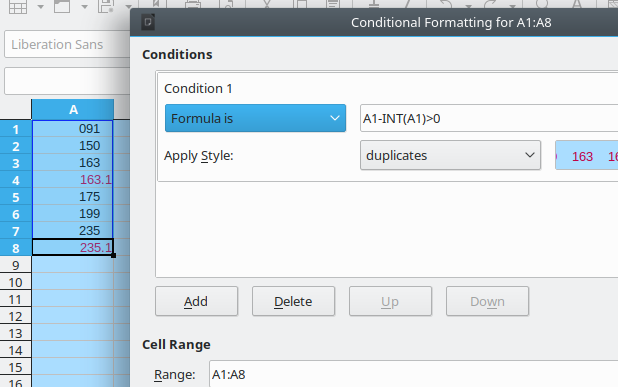 Gee, didn’t think of that–I will try it; however, I have it set to not permit duplicate “3-digit” numbers which is important.

LeroyG, nice and clean! I use decimals to flag things on occasion, so I’ll be sure to “steal” this so they standout. But that’s not why I’m tacking this comment on. Rather…

Can you check to see what happens on your Numeric-alpha sort sheet when you right-click your data range and select Conditional Formatting…? I get the notification dialog to overlap or to change, but if I click No I get no chance for overlap, and if I click Yes I’m not seeing the conditional formatting that is actually there already (to edit it), but just a ‘suggestion’ to use Accent style. Am I misunderstanding the notification dialog? I’m using 7.2.2.2 and regular Format-Condition-Manage works just as expected.

But it works if the complete range is selected (Ctrl+* select, if the range is isolated).

Make sure all your cells are of type Text, not numeric.

All cell content of selected cells will be “re-entered” as text content.
After which you can invoke Sort with option natural sort (for example in case 091 was actually numeric 91 and only displayed with a leading 0).

BTW, Excel’s Range.Replace method ignores the cell’s text format.
Example. Cell A1 has text format and contains the text 1. After replacing 1 to 1, the cell will contain the number 1 (the text format will remain).

THANK YOU, THANK YOU! That works beautifully! The only inconvenience is that when all is said and done, it appears I will have to add a zero to the front of number “000” through “099” to maintain the 3-digit format but that is minor in comparison! Cannot see how to mark this as “Solved,” but it is.

Excel’s Range.Replace method ignores the cell’s text format.
Example. Cell A1 has text format and contains the text 1. After replacing 1 to 1, the cell will contain the number 1 (the text format will remain).

That’s a piece of dirt. That behaviour makes it a one-way road, you can convert from text to numeric, but not from numeric to text. (unless there’s some other flag/option/magic/mystery to solve that again).

I think the developers of the Range.Replace method simply forgot that a cell can be in text format.