Putting macrons over vowels - How?

In word processing, is there a way of putting macrons over vowels, e.g. over the vowels a,e,i,o,u in the Maaori language to indicate they are long vowels?

If you have Windows 11, you can add the NZ Aotearoa keyboard and then you have the macrons available to all programs. The modifier key is the tilde/back tick key ~ on the left of the number row. To add the macron to a vowel press the back tick key and the vowel at same time. Identity Through the Macron: The Windows 11 Aotearoa Keyboard – New Zealand News Centre

[Edit] For Windows 10 it looks as though you need to choose a Maori keyboard, see Te wiki o te reo Māori: How to type macrons in Windows

And if on Linux you can simply use the (configurable in at least GNOME (gnome-tweaks, Keyboard) and KDE) Compose Key followed by the vowel and _ underscore (or vice versa, doesn’t matter). Loads of combined and diacritic characters can be produced that way using different modifiers.

Choose Insert>Special Characters from the menu.
In the dialog, enter “macron” for Search.
Select a desired character.
Click the “Insert” button. 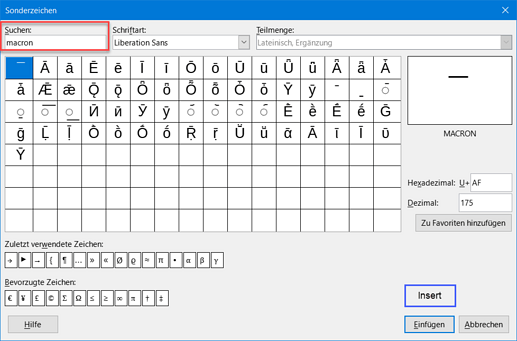 U+00AF is the MACRON (non-combining).
To get the COMBINING MACRON you need to use U+0304.
In LibO typing o0304 and pressing Alt+X should create the combined pseudo-glyph ō. The deviation along the menu and the shown dialog is dispensable.
Just a funny idea: Ǖ is the combination of the (German) Ü (&Uuml;)
with the COMBINING MACRON. This to illustrate what @ajlittoz hinted.

In word processing, is there a way of putting macrons over vowels

If you really need to “compose” glyphs you should look for (ancient) TeX, where you actually could put accents over/under letter like "o for ö
.
Today the typical solution is to use the predefined code-points of the Unicode fonts, and to check if the used font has all necessary chars, as already shown in the first answer.

Unfortunately the existence of two forms immediately create an ambiguity because “legacy” precomposed glyphs can also be represented by a sequence of base letter+combining marks. Thus, two visually identical texts may have a different encoding and don’t binary compare equal.

Unicode addresses this issues by defining a canonical representation where every glyph should be encoded by a minimal-length sequence. According to this rule, precomposed glyphs are preferred over combining sequences.

Note that the combining feature is language-agnostic. You can then create combinations which don’t exist in any language.

IMHO, avoid macros whenever you can. In this case, an AutoText or AutoCorrect is preferable: no programming skill required, no stress on Writer, no side-effect security risk (you can continue using LO without macros enabled).

Choosing between AutoText and AutoCorrect is a matter of the number of keystrokes you accept.