Since v. 5.3, LibO Writer happily supports use of opentype features, using the feature tags with the fontname in one of two forms:

Both of those would give you the “Oldstyle Figures” while using “Fontname”.

I seem to have run into a sort of “gotcha”. I prefer to use oldstyle figures with Cambria in my “normal” documents. However, when I want to get rid of the :+onum feature … I can’t! Regular CTRL+H search and replace is quite irregular in finding Cambria:+onum as the Format > Font search field, and the venerable AltSearch fails for me on this as well.

My workaround at the moment is to assign a different document template which does not make use of opentype features. However, it ought to be possible (I would assume) to do some kind of automated search/replace on these feature tags. Is it?

While that commit is a step in the right direction I do not see anything there which helps here.
That commit is simply adding code to read the OpenType features from the font files.
There is a later commit which adds an interface to work with OpenType features.
But that just automates adding the codes to the font name (same as now).
Does not seem to affect search functions.

IMHO, this a semantic markup issue. The numbers in “oldstyle” have a particular meaning for you, whereas other occurrences may be formatted “normal” because of a different meaning.

As a consequence I’d suggest to create a specific character style for your “oldstyle” numbers, forcing Fontname:+onum in the Font tab.

For this to be effective, the opentype feature must not be activated in any of your paragraph styles.

Of course, marking up an existing document is boresome but it will lighten maintenance burden.

Since you’re a respectable guru, I won’t make the offence of adding the traditional stance about question etiquette. Cheers.

+1 for another approach to the problem … of course (like my own “workaround”) it doesn’t directly address the issue of doing search/replace on opentype features, as they have been implemented for Writer (which you realize, of course!). Hopefully we’ll get yet more clarity on this one, then.

I have no problems with searching for fonts with OpenType tags: just write the tag when you select the font to be searched!

(sorry for the Spanish screenshot!) 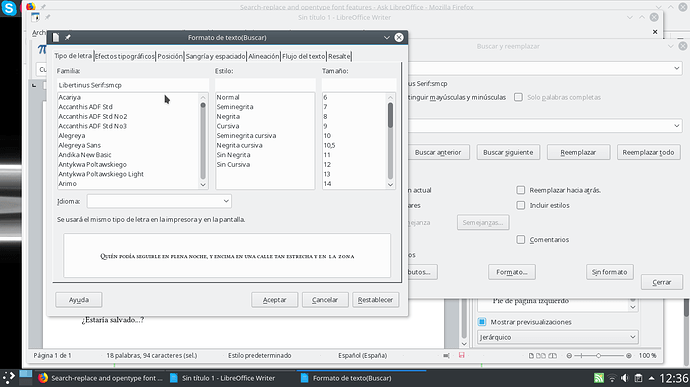 But… always use styles!!!

A technical point: the “=1” is for Graphite fonts, it gets ignored on OpenType fonts. On LibO, for OpenType fonts and multiple tags you can use either