SUMIF for multiple sheets between 2 sheets

I am attempting to do something similar to totaling expense amounts for a group of sheets. However if I want to add a sheet in the middle (such as January_1 between January and February) I’d like that sheet to also be included. Right now I’m using:

and it works well for January. What can I use (what is the best way) to include all sheets between January and December? 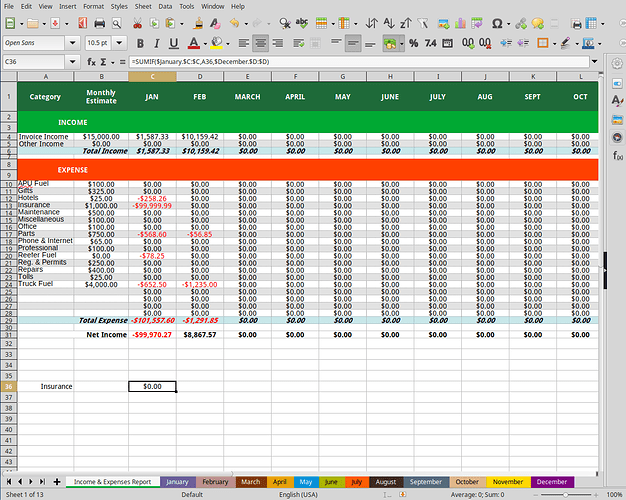 Maybe you’re misunderstanding how SUMIF() works. In your example it looks up the value of A36 (here Insurance) in the range C:C, for which there is no match at all. So whatever $December.$D:$D may contain, nothing is summed.

You may have wanted to use =SUMIF($January.$A:$A,A36,$December.$D:$D) instead, to lookup Insurance in column A, for which there is one match in A13, so the result would be the sum of December.D13, but there’s also another match in A36, so whatever would be in December.D36 would be summed as well. You rather want to specify explicit ranges (e.g. $January.A10:A28 and $December.D10:D28), or at least not have the criteria data in the column to be evaluated in the match.