I was working on a document in Ubuntu then had to go to Windows to finish it. When I went back to Ubuntu, I saw that somehow the document had been converted to docx format instead of odt. I have no idea how that happened, as I know the document was an odt when I started it. But whatever - apparently Windows converted it and didn’t keep the odt. The odt is just gone.

So I go back to Ubuntu and it seems things are there, but the formatting is all messed up. I cannot see the entire caption or even the whole image on several of the images that were clearly visible when I made them. I can see there are the little squares that mark the edges of the image, but the image itself and the caption are obscured. There is this little red arrow on them. How can I get my captions and figures back to normal?

I want to be able to see the rest of the image and the caption beneath it. For some of the images, there is no problem. For others, they look like the below. If you look, you can see the little red arrow on the right hand side of the image near the bottom of the visible part. What is that?? 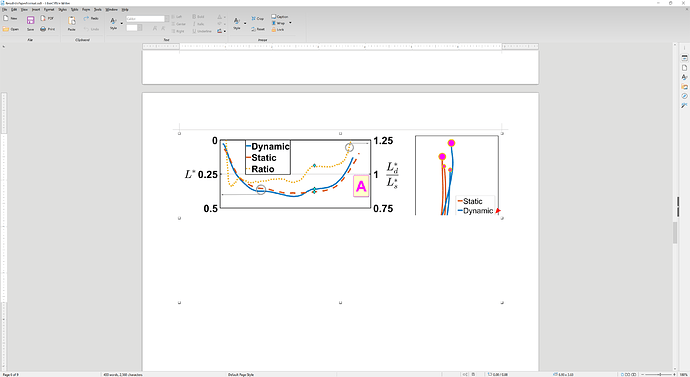 Edit your question to give more information about images and captions. How are they anchored? Did you use Insert>Caption for them? Are they inside “text boxes” or whatever or inside frames?

When you went to Window$, was the document edited with Word (which can read .odt) – and this could explain the conversion – or with LO?

Have you still your initial .odt?

Please do not use Add Answer but edit your original question to enhance the details of your question (answers are reserved for solutions to a problem on this Q&A site).

I used Libre office in Windows. I think it is an older version than I have in Ubuntu.

Can you attach a 1- or 2-page sample file with the issue? Edit your question and use the paparclip tool (not available in a comment). Attach the file at end of your question (bottom of the edit).

So what do I do with contents overflow? As in, how can I get it so that I can see the image and caption again?

I can’t guess without analysis the file. So, attach a sample as requested.

I can’t do that, as the work is for publication. I solved it anyway. I will post my answer. Thanks

Ultimately, I had to copy and paste into a new document. This was a tedious process, and many of the captions were not visible so I couldn’t copy them from the old document and then re-write them. Fortunately, a few were in the pdf version I had saved earlier and this allowed me to use a text select tool to copy the text from there.

This is just another incident that points to why LibreOffice, though very good quite often, still has lots of bugs and may be untrustworthy for important documents. I advise everyone reading this to make back ups frequently and to save in other formats often as well (such as saving and inspecting a pdf). Doing so will be standard practice for me from now on.

“Untrustworthy” is excessive. The main cause here is the spurious conversion. It can have very harmful consequences if you don’t use consistently Writer with styles. Conversion + direct formatting is the most reliable way to chaos. This is untrustworthy but put the blame on the user himself for not observing styles rules.

“… lots of bugs”, IMHO, relatively less than other suites. Please file a report with a way to reproduce it if you expect it to be fixed.

I reiterate my offer to analyse the cause (which is most important to avoid the same problem in the future). I perfectly understand that the document in its entirety is private. This why I requested a short sample limited to 1 or 2 pages. Text itself may be replaced by “lorem ipsum”. It doesn’t matter. Just keep one problematic image and its caption. This is enough.

As for backups, adopting a systematic procedure for them is peace-of-the-mind not only for LO but for absolutely any application.

I speak from experience. It isn’t just this incident that made me say that LF may be untrustworthy for important documents. As I have lost lots of work and had to restart many times while using LF for the last few years, I think I am entirely justified in my assessment. “Style Rules” LOL! Instert>Image and Insert Caption are hardly violations of “style rules” but just keep blaming the user. Nothing new here.

In the Windows machine you probably had set the always save as document type to be .docx, thus proving that users are buggy and need further work

The format .docx does not support all LibreOffice layout options. Once it is converted to docx those layout options are discarded because they cannot exist in the format.

Why didn’t you go back to the odt version that would still exist and rebuild just the work you did in Windows?