I have an .odt doc which uses the the Black Right-Pointing triangle character (See https://www.compart.com/en/unicode/U+25B6 for an example.)

However, on Linux Mint 21, LibreOffice renders it as a Play Button emoji (see https://emojiterra.com/play-button/ for an example.)

On the latest version of Xubuntu and Windows 11, the doc renders it as a Unicode triangle. Only on Linux Mint does it show as an emoji. All three OSes are on the same version of LibreOffice.

Linux Mint renders the Unicode triangle correctly elsewhere (Text Editor, web browsers, etc.) Only in LibreOffice (I’ve tried both Writer and Impress) does it show as an emoji.

Even more problematic: when I export the doc as a .pdf, it saves it as a Unicode arrow, but it’s transparent (or perhaps white). You can’t see if, but you can select it and paste it into another doc to confirm it’s the Unicode arrow.

Is there a setting where I can turn off converting Unicode characters to emoji?

Thanks for any help you can give. I’ve spent a couple hours on this and haven’t found a solution yet.

We know you’re under Mint but which release? What is your LO version?
For best diagnostic, attach a sample file with your “right-pointing triangle”. Which font is used to display it?

Only on Linux Mint does it show as an emoji.

The play button is the U+25B6 U+FE0F sequence, where the U+FE0F Variation Selector-16 exactly distinguishes the emoji from the plain text character. If Mint displays U+25B6 alone as play button it does it wrong. Or do you by chance have a play button in the document and it’s not displayed correctly on Xubuntu and Windows?

I’ve attached an document with the arrow in it. In LibreOffice, it shows as an emoji. If I select the character and paste it anywhere else on Linux Mint (Chrome’s URL bar, Text Editor, etc.), it shows as the Unicode character.

If I change the font to certain fonts, it renders as a Unicode shape, such as DejaVu Sans. But in Calibri, which is what the rest of the document is in, it renders as an emoji. Again, this only happens in LibreOffice in Linux Mint.

My current workaround to export it to PDF successfully is to log in to a Xubuntu virtual machine, which renders the document as intended.

I thought it might have something to so with fallback fonts. I found this article…

and followed it’s instructions, but the problem remains.

Below, I’ve attached a sample .odt. Since I’m a new user, I can’t attach multiple files, so I’ll add them in a second and third post.

Thanks for your help!

Here’s how LibreOffice in Mint renders it. 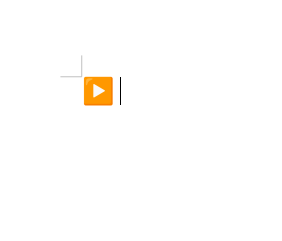 And here’s how it renders when I copy the “emoji” from LibreOffice and paste it anywhere else in Mint (in this case, the URL bar for Chrome).

It happens the same in Fedora Linux 36, LO 7.3.4.2, irrespective of the font face. I suspect some AutoCorrect behind the scene but couldn’t find any setting to disable it. Hard-wired in the code? In this case this is a design error unless it is an artefact in the font renderer.

EDIT
According to this Wikipedia article, the Geometric Shapes block contains eight emoji. Selection between base shape and emoji is controlled by an additional suffix “function” code point, a variation selector which is a combining character: U+FE0E (VS15 for text) or U+FE0F (VS16 for emoji).

Unfortunately, it looks like Writer or its font renderer HarfBuzz ignore variation selectors.

Thanks for looking into this! All this Unicode/Emoji/Variation Selector is way above my pay grade!

Like the character you provided, I found a couple other Unicode arrows that don’t get turned into emojis, including ➤ and ▷. Not sure which I’ll end up going with, as nothing can be as glorious as the original

Here’s how LibreOffice in Mint renders it.

And it is the same what fileformat shows for U+25B6. I assume that the emoji just uses this glyph, and it’s how some font has it (see “Emoji “arrow_forward” is BLACK RIGHT-POINTING TRIANGLE (U+25B6) Unicode codepoint”). And your substitution choses that font on Writer.

And it is the same what fileformat shows for U+25B6. I assume that the emoji just uses this glyph

It shouldn’t, though apparently some fonts/rendering think it would. As said,

The play button is the U+25B6 U+FE0F sequence, where the U+FE0F Variation Selector-16 exactly distinguishes the emoji from the plain text character.