Why can I no longer style Find All items from Search?

An important function of LibreOffice, which I’ve been using for years, is that I can bring in ASCII text files that I’ve tagged with style indicators (like \H1 for heading 1, \NS for new stanza in a poem, \E for epigraph, etc.), then quickly style them throughout the document like this, with the style pane open during the search:

Replace \H1 (the text string) with nothing to remove the tag

The Heading 1 style is applied throughout the document, then I wind up with all headings styled and the tags removed.

But now, when I do this, the Heading 1 style appears to be applied as before (at least it shows up in the top left stylename box when I click into the line on which the \H1 tag was found), and some of the styling (like start on a new page) works. But the font and size is not applied. I’ve tried doing this with the auto-update box checked as well as without; either way does not work.

This is so dire for me that I’m going to have to abandon the software if it cannot be fixed. Please help.

Please note: in the examples above, I used \ because entering a forward slash (as I actually use for my tags) does not work in this forum (it autoreplaces with something else). Wondering if that character was somehow illegal for searching (never was before) I tried replacing it with . Didn’t make a difference.

Please see the attached screenshot showing what I’m seeing here. What makes me think it’s a LibreOffice problem is that the style has Adobe Garamond Italic 15 pt (which shows in the pull-down) but Font Name/Font Size windows show regular Adobe Garamond 12 pt. It’s not picking up the info it needs somewhere. 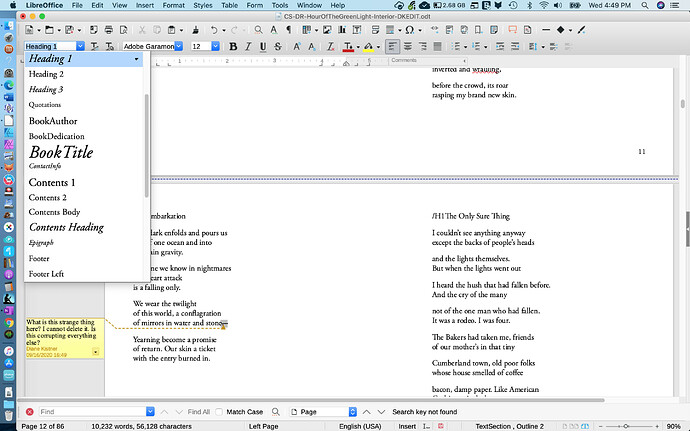 This is a fresh install of the more stable version after removing 7.0.1, which is what started me having the problem. Still having the problem. I’ve repeatedly removed all direct formatting, and it doesn’t fix the problem. I am on MacOS Catalina Version 10.15.6 (19G2021), MacBook Pro (Retina, 15-inch, Early 2013). I’ve rebooted and rebooted, post-adjustments trying to fix this.

I’ve gone into my Typeface font manager to make sure no settings were changed from what I was using before in terms of fonts updating in applications.

Is there something deep in the guts of the LibreOffice supporting files on my system that might have gotten corrupted that needs to be deleted?

I’m going to run repair utilities on my whole system and try again.

Well, I’ve reinstalled my font manager, reworked all whole Fonts directory to ensure no duplicates, checked every single checkmark in LibreOffice’s setup in case something related to starting Heading 1 on a new page might be causing the glitch, and now I’m down to the very last thing to try: I’m recreating the template file from scratch. Will let you know if that finally solves the problem.

AS IN LIFE, CORRUPTION IS A PERNICIOUS THING

You don’t want to believe it. You’ll do anything to avoid facing up to the fact that this level of corruption even exists. You’ll spend hours and hours and hours and hours distracting yourself with everything else that could possibly be involved, trying to get to the bottom of it in a way that makes some sense, to the point of exhaustion. But, then, there it is…the only explanation left…which turns out was the answer all along.

Sigh. Maybe I’ll have that drink now…but at least my font problem is solved. Thanks, everyone, for all the good help. RIP RBG

Have you checked if Heading 1 style font and size are correct?

Can you share your operating system and LibreOffice version? To do that, choose menu Help - About LibreOffice and copy from there.

Press edit below your question to add more information.

It shouldn’t be that, but try to choose menu Format - Clear Direct Formating (the same that Ctrl+M) before choosing Heading 1 Style.

@dkistner1111, Give a look at LibreOffice user profile - The Document Foundation Wiki