I have an HP Pavilion Touchsmart laptop with Windows 8 64 bit OS, which runs Metro for the start screen.

I have the following Java version installed: Java Platform SE 7 U25

I downloaded LO 4.1.0.4 from the clarkson.edu server and when I tried to follow instructions to install it, I got noting but problems:

The first one was this: 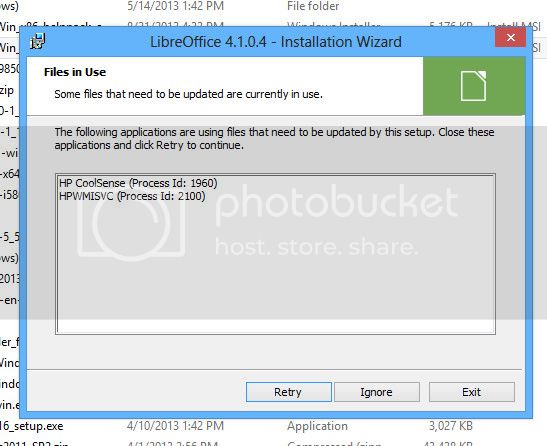 So, what do the files needed to run my Laptop OS have to do with LO installation? This was NOT an issue when installing LO 4.0.1 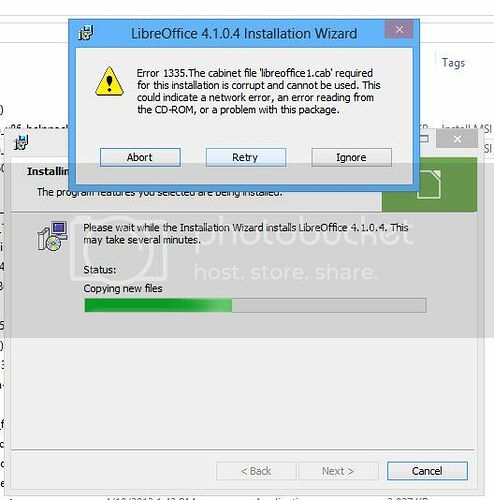 Ok, so if libreoffice1.cab is corrupt, how is it that the prior version of LO was able to be installed without trouble of this sort on the same Windows 8 computer?

Thirdly, after telling the installer to retry, and failing that, ignoring, this was the result of attempting to install LO 4.1.0.4 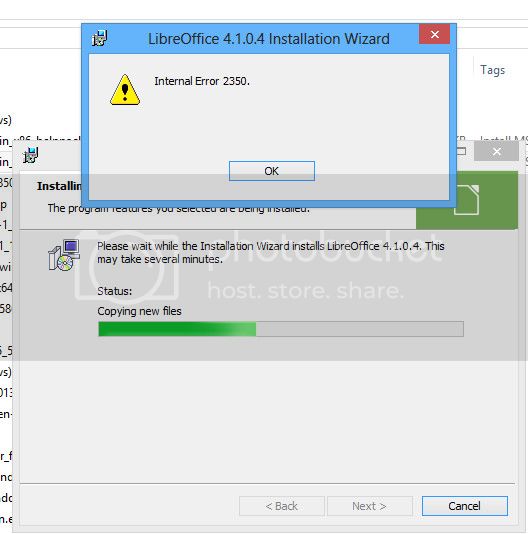 Then the installer quit.

Why such problems just to install a newer version of the software that a user already has installed on his system?

Why can’t the installer just work like the previous one?

LO team: Please fix or make installation as simple as the 4.0.1 installer was!

Had the same problem (the first problem you mention) with HP envy and Windows 8, solved.

Have you tried redownloading? The first of the 2 errors you mention look as though it got corrupted on the way to your computer, and the second seems as a result of the first. Also, if you can, download through libreoffice.org itself, or through the torrent link listed there (most torrent apps will make sure that the file isn’t corrupted as it gets downloaded)

The warning you got at the beginning would have been there previously, if the two applications listed were open. You just need to close them, the click “Retry”. I believe it’s part of the Microsoft installer that checks for any apps which might conflict with installation.

Give these tips a try and if they don’t work, then leave a comment or update you original question.

Thank you for your answer.
Yes, I did download from the libreoffice.org link and the download link from there took me to the clarkson.edu mirror.
The very first time I tried downloading, it gave me a torrent link and Windows 8 had no idea what to do with it.
I should not have to install extra software (torrent client) in order to download and install my favorite office software. I don’t use ANY torrents, not even for Sourceforge.

As for the HP applications, I have no idea if closing them would harm my computer. I don’t want to play around with those.

I’ll try another mirror but I really don’t have a lot of time to be trying this many many times due to corruption frequently. Can’t there be a better server or a better way like in previous times?

update: I looked again on the mirrors page and downloaded from the Indiana.edu server. Then I uninstalled 4.0.1 BEFORE installing newer version. – Why does the installation instructions not tell the user to do that? The installer complained again about the HP CoolSense and HPWMISC files so I chose “Ignore” and LO installed nicely.

I still have questions:

I still don’t understand the installer asking to stop the use of whatever file(s) hpcoolsense and its quick launch are using in order to update them – no other program installer has ever asked to stop those tasks (HP CoolSense and HPWMISC) nor update the files they are using. Why would an office program need to update such files?

If the Microsoft installer is responsible for this, why would it think those files would conflict with the installation of L.O.? After my choice of ignoring the “warning” L.O. installed just fine.

P.S. This time I got an md5 Calculator app and used it to make sure the downloaded installer was ok before I proceeded to use it. Thankfully it passed the test.