Why is it that LibreOffice 5.3 doesn't show any words (names of programs, tools, etc.)?

I’ve just installed LibreOffice 5.3 and it’s English guide (the update) on my Window 7 PC, but when I opened the program, it didn’t showed me the names of the tools nor the apps (Writer, Impress). The website said that this version was stable, the one with the less bugs. Is there something wrong with the update or anything in particular? Can someone please help me? Thank you! *Also, when I opened an old document, it came out blank. 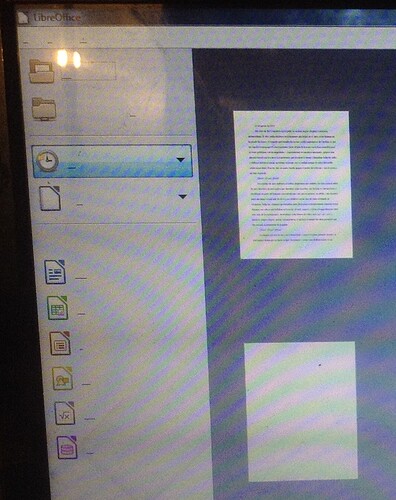 Sorry, I don’t understand. Do you mean for uploading a picture?

No, just for the reflection of the back of your room on the screen

On some systems you can make an automatic screenshot by pressing the “PrintScreen” or “Prt Sc” key on your keyboard.

I only proceeded the update of the version 5.2.7 of Libreoffice to the version 5.3.6. Unfortunately, the menus, dialogues, etc., has changed for a small fine line. It’s impossible to read a text… I tried to reinstall with the repair option but this is without amelioration.
Then I all uninstalled, I rebooted the computer on windows 7, I downloaded again the file of the version 3.5.6 and reinstalled … without better result.
I can change the police and these attributes but I don’t get better

…but I don’t get better results.
I can see a good small image of my old files before their overture but not after.
Thanks for your help.

LibreOffice has some graphics issues with the Windows builds caused by moving from legacy MS Windows GDI/GDI+ calls to current MS DirectWrite font managment and Direct2D rendering of text.

The bug OP posted to the TDF Bugzilla instance was tdf#112550 , commented for OP there, however it was closed as a known issue, tdf#107166 Text is invisible, both in UI and in editor on update to 5.3.2, older AMD and Intel GPUs

It has been corrected for the 5.4 builds, but root cause is GPU and driver mishandling of the DrirectWrite Direct2D rendering that LibreOffice has moved to. On 5.3 builds, a driver update can help on an older Intel or AMD GPU, and forcing LibreOffice onto one or the other GPU when both integrated GPU (iGPU) and discrete GPU (dGPU) are involved. Intel CPU’s iGPU with AMD dGPU graphics. But AMD iGPU with dGPU on Windows 10 has also had trouble – tdf#112306 Text is invisible, both in UI and in editor, AMD R5 and R7 drivers Windows 10

So fix would be to upgrade to 5.4 and/or update drivers?