Why is there no Consolidate option under the Data menu?

I am trying to follow tutorials to consolidate data from two different sheets, but there is no Consolidate option under the Data menu, as is referred to in tutorials. Why do I not have this option and/or where else can it be found?

What version of the LO are you using?

The Consolidate item is present in the Data menu in my LO 6.2.8 permanently installed, and LO 7.0.0 portable versions on Windows10x64prof. 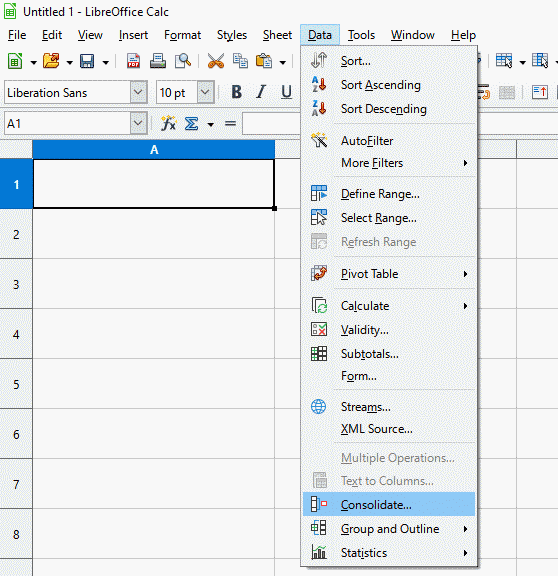 I just got a new computer that has Windows and downloaded the extension “Libra Office Suite” – “LibrA” not “Libre” – perhaps it isn’t the same?

The LibreOffice is an open source and free Office suite, but not an “extension”. I never heard about the “LibrA Office Suite”. Use the offucial download site of the LO:
LibreOffice download page

I suggest you to use the latest Still version. It is the LO 6.4.6 today.

acc. to Micro$oft: BEST OFFICE SUITE FOR WINDOWS 10 ‘LibrA’ is a LibrE-clone by ‘our little sister’?

they even adopted LO’s icons! - to a very near similarity!!!

a joke and ‘hidden camera’?

is LO aquired by M$? has someone allowed them to clone LO? should we take legal action against them? or behave chinese - “it is an honor to be copied” - and say thank you?

i had expected some commercialization after @mikekaganski and others suggested renaming the ‘free’ LO to ‘private edition’ (or similar), but not something like that … that’s harsh! … that’s too blatant …

still in hope someone is kidding with me and thus smiling …

Just someone piggy-backing on the success of LibreOffice put it into the MS-AppStore.

But why did you hijack this question?

hello @erAck,
thanks for the clarification, it’s not M$ itself but some third party? and not a clone but LO itself? then it should have the consolidate option as shown by Zizi64,
hijacking? - i don’t understand, just wanted to point OQ and @Zizi64 to the difference, and express my amazement about such developments …
your links - got me shocked, didn’t check as i don’t want to buy, is it ‘the standard free LibreOffice’ marketed there - imho that’s not covered by the license - or is it LibreOffice with some extra service - which might eventually be covered by the license - ??
i NEVER wanted to contribute to something which is sold in an M$ store, NEVER …

What device you want to install the LibreOffice on? You can install the official LO on PC-s and Laptops with the “normal” Windows 10 operating system.

But there is a “cheap” Windows version (named: Windows 10 S) with limited rights for the intallation. In my opinion it is not the best choice for you if you want to install independent softwares.
I suggest you: do not use it. (Install normal Windows or use one of the really free Linux distributions.)

it’s not M$ itself but some third party?

Yes. I doubt MS would do such thing.

and not a clone but LO itself?

The question doesn’t mention that app, so I wondered why you came up with it as an answer.

@erAck: comment from OP was: ‘I just got a new computer that has Windows and downloaded the extension “Libra Office Suite” – “LibrA” not “Libre” – perhaps it isn’t the same?’ - there it came in … not me doing ‘advertising’ for such things …

Seems I missed that comment… sorry for fuzz. Also wasn’t meant as advertising, I just wondered.