Why is Writer designed so that if a document ends in a textbox, you can't move the cursor past it?

This screenshot is of a document I made by copying and pasting several Gmail messages. It’s a compilation of responses to a question, and I need to keep the messages in their original format. What’s quite surprising is that Writer won’t allow the cursor to move beyond the last textbox, which you can see at the end of the document. (I’ve hidden earlier boxes because they contain people’s addresses.) 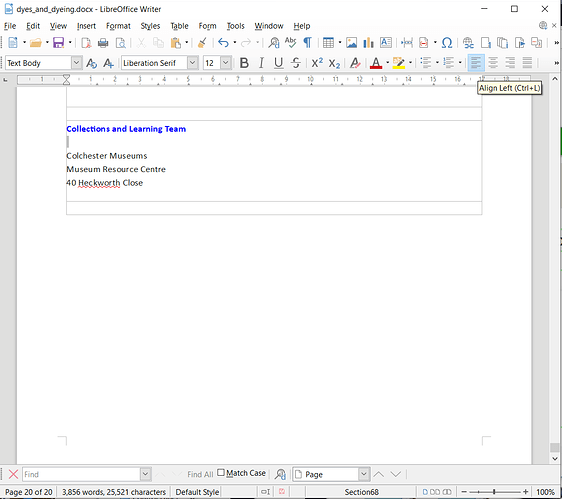 This behaviour violates the ergonomic principle known as the Principle of Least Astonishment, described in Principle of least astonishment - Wikipedia :

It also violates orthogonality ( SteadBytes |TPP Topic 10: Orthogonality ), because it means that copy-and-paste work differently on different kinds of text. When pasting, a user has to know that they’ll be able to move beyond the pasted item if it doesn’t contain textboxes, but not if it does.

What benefit did Writer’s designers envisage from this behaviour? Am I somehow meant to close things that I paste, so as to force the cursor back to an outermost level? Or am I missing something else I ought to know? It’s not a problem I recall ever having with Word.

Incidentally (note added a few minutes later), I found a solution, I think. Suppose that in document D which ends in a textbox, you want to append clipboard text E. Then you make a new document N, and head it with the line “AAAA” and tail it with “BBBB”. Then cut D and paste it between these lines in N. Then paste E into D, first heading it with the line “ZZZZ”. Then copy all of N and paste it before the “ZZZZ” in D. Then clear up by closing N. It may be useful to keep the “AAAA”, “BBBB” and “ZZZZ” right until the document is finished, as they seem to provide barriers against recurrences of this behaviour. So basically, you’re temporarily moving the textboxed text out of the way from D, pasting your text to append into D, and then putting back the textboxed text before that.

In Writer parlance, a text box is a graphic object (containing text) outside the main text flow. I don’t think this is your case. The gray lines show that the data is contained in some “object” but we can’t guess its nature only from the screnshot. It might be a table.

You didn’t enable View>Formatting Marks which could have given some clues about the structure of your document at this location.

In case this is a table immediately preceding the end of the document, you can’t indeed put the cursor after the table because the last selectable position in the document main flow precedes the table. You must first add a “new last paragraph” because a table is an object external to the main flow.

You now have an empty line below the table.

If this doesn’t work, edit your question to replace your screen shot with another one after enabling View>Formatting Mark.

On this site, answers are reserved for solutions. Any additional information or request should be provided by editing the question or using a comment.

Note: the edit only fixed misspellings and typos.

They’re probably sections, you get sections a lot when you copy-paste from HTML as well.