I have a large game design document I’ve been writing up for the last year. At a standard letter page size, it is roughly 85 pages in length. I dislike having to break it up into discrete pages, so I have tried editing it in web layout. Unfortunately, performance is greatly reduced when I use web layout. The apparent framerate while scrolling appears to be in the single digits, and while editing the document things are equally as sluggish, with occasional freezeups lasting anywhere between 3-10 seconds.

Is there anything I can do on my end to alleviate this issue, without splitting the document up into smaller documents?

I have tried forcing libreoffice to run with the gtk2 and gtk3 toolkits, but neither have had any effect. I have tried disabling hardware acceleration, and that made no difference.

What are your memory settings in LibreOffice?

Under Linux, I have “Use for LibreOffice” set to 256mb and “Memory per object” set to 10mb. Under Windows, those are both at their default values of 128mb and 8mb respectively. Also, wouldn’t it have been better to place that question as a comment rather than an answer that asks a question?

Okay, for some reason I can no longer edit my original question. I was going to add that this issue is seemingly worse under Apache OpenOffice.org, where it freezes for a couple minutes after turning on web layout, and then after that the framerate is less choppy by the random freeze-ups are longer.

I have a 471 page document with 551 images in LibreOffice 5.3 on Windows 7 - and in regular edit mode it scrolls pretty fast. And this laptop is no where near the specs of your computer.

Just changed to Web view and it took 3-4 minutes to respond and display, then again showed Not-Responding, and then when it came back scrolling is very slow with additional lock-ups. Back to Normal view - fast again.

I set 50MB per object to deal with some large images. Once an image is uncompressed in memory it can easily be 30 to 50 MB.

If you want to view your document with less wasted screen real estate try Hide Whitespace.

Still scrolls fast for me.

Hiding whitespace accomplishes most of what I wanted. One issue though, is that (at least on Windows with LibreOffice 2.2.5) is that if I turn Hide Whitespace on and then off, then the window completely deadlocks and has to be force-killed. Will see if this occurs on Ubuntu when I’m done updating stuff on Windows.

I have also added keyboard shortcuts for all the Zoom Levels.

Optimal view (Ctrl+Alt+O) - maximizes the view to show just the part of the page inside the margins.

So that combined with Hide Whitespace would give you essentially what you want - just the content.

Okay, thanks. Also, the freezing issue with turning off Hide Whitespace seems to occur on Ubuntu as well as Windows. However, it seems to be specific to my design document, or perhaps a specific element within my document.

The freezing problem with Hide Whitespace has seemingly vanished after I took out nearly two dozen page breaks in the document. Also, be sure to add your solution as an answer

I know there are some recommendations around to use the Web view to see just the content without margins or page gaps, but I think Web view essentially makes your document one very long page.

While this makes sense when making actual web pages which are relatively small, it appears to cause performance issues with long documents.

If you want to view your document with less wasted screen real estate try Hide Whitespace.

That eliminates the vertical space (margins) between pages

I have added keyboard shortcuts for all the Zoom Levels; makes it easy to change the view. 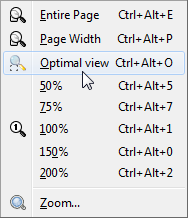 Optimal view (Ctrl + Alt + O) - maximizes the view to show just the part of the page inside the margins.

So that combined with Hide Whitespace would give you essentially what you want to see - just the content.

Thanks for the help. The only flaw with this is that the setting appears to be tied to the session rather than the installation or the document, so I have to turn it back on each time I start up Writer. But, that’s only a minor issue.