We receive a set of slides that are to become still images for use in video editing.
We need to extract them and dump them into a media pool for use in the video editor.
I’m surprised that this is so difficult to do. This is what I know so far after a fair amount
of research. Pardom please if I have missed something that has developed, but I did try.

So I know an impress slide set CAN be converted to an HTML file set, and that
images of the slides are contained therein. Web searches identify this as THE solution for
dumping the slides out of a presentation in an image format.
BUT this is a poor workaround, as the output files are generically named and mixed in with
other files making up the HTML file set. Working with the image files then
requires isolating the .PNG files from the rest
of the html implementation files, and renaming the generic imgXX.png files back to
the root file name of the original slide set in you want to keep file names distnct from
the files extracted from another presentation. This is very cumbersome.
Especially if trying to set up a procedure for operators minimally skilled in file management functions.
Obviously someone tried to solve this problem with the extension export to image, but that
extension does not work anymore.

So I’m asking for you to support exporting all of the slides in a selected format, with the
name of the presentation used as the root of the names, and it would be nice if the appended
slide number be 0 filled so that the file names sort in a directory in the correct order ie for
10 slides: _01 through _10 instead of _1 through _10.
Instead of implementing this with a an EXPORT which would assume export of the whole presentation,
you could implement EXPORT AS… with the same existing dialog box BUT process the SELECTED
set of slides instead of just assuming the one current slide.

So I’m asking for you to support exporting all of the slides in a selected format, with the name of the presentation used as the root of the names,

You are requesting a new feature, hence you are wrong here (see Introduction - Feature Request).


Before filing an enhancement request - did you already try extension [Export As Images](https://extensions.libreoffice.org/en/extensions/show/export-as-images) - though it may not cover **all** your requirements?
> but that extension does not work anymore

My comment does not fit here so I am adding it as an answer.

Oh and now I can’t get rid of the export as images even with an ininstall and resinstall of the office package. Argh.

Wow, its not true because it worked for you?

(But thank you for the direction to the feature request.)

Yes I tested it.I added that extension and it did not show up in the menu as documented " It adds a menu entry “Export as images…” to File menu". Also attempting to remove it failed.
my LO version I just installed from the official website. Extensive web searches indicated that
there was mixed success, mostly with LO versions back in the v4 range, with folks saying what I
was seeing- no menu item as expected and inability to remove the extension. Exactly what I saw in this
version 7 level. I also could not invoke it “as a macro” as some sites suggested, it does not show up in the
macro list. It was a reasonable conclusion that the extension did not work. I tried both the latest and the next previous version of the extension. Other web searches recommended the save as HTML, which did work as
advertised but I found it inappropriate, as I wrote. Based on folks recommending save as HTML,
I figure the Save as HTML was deemed by LibreOffice to be its preferred solution to saving images of the slides.

The version I just updated to:

Here is the extension shown installed:

And here is what I have in my menu: 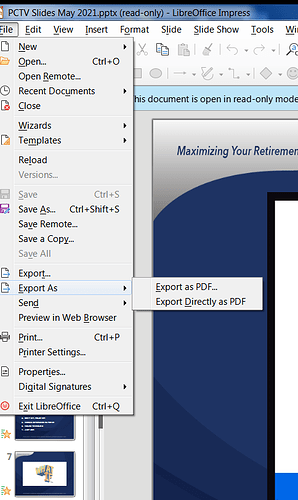 And here is the failure on the uninstall:

Wow, its not true because it worked for you?

Do you really want to talk about logic? OK - a statement is false (not true) if there is a single counterexample.

Also, Ryan Csuha on 2021-3-28, suggested repackaging the Export As Images.oxt so it would work.

That is correct it is an extension of the original comment because Add Comment would not permit me to post what I wanted to post, it is limited in number of characters. So now that you understand that, what I was demonstrating was that the extension DID NOT WORK for me and hence my request perhaps for it to be added as a feature. That perhaps is premature, perhaps someone actually wants to pursue why the extension did not work and if it is broken for me (maybe broke for me in Windows but worked for you in Linux) someone would want to fix it. I went down the path of requesting a feature added because historically I have had poor experiences with most of my attempts to make use of extension for products in general- from not working at all to going stale as the main product progresses and not being maintained).

What do you think of my proofs that the extension does not work in the current windows version under Win7 home as it is on my PC. Do you agree that it (1) does not put itself

(There it goes, that was as much as I could put in a comment, so here’s another)

… into the menu as advertised and (2) it garks on attempt to remove it.

So, aside from arguing logic of whether the extension is in a state of working or not working,
am I doing something wrong, is this evidence of flaws in the extension, and what should I pursue
getting it fixed or getting a bonified feature added to Impress.

Or should I get a PPT license.

BTW: Thanks for the links to the other conversations, it was nice to see that they discussed some things that I discussed in my first post, including the HTML as their idea of a workaround though I detailed why it was not a good one in my case.

Ah, I see now why you said it was not much of an answer, more of an extension of my question.
Yes I formed that sentence poorly, what I was trying to say was I had to use the FACILITY of the Answer dialog box to continue my question (add my proofs that it did not work for me though it worked for you) in that form because the Comment dialog box facility did not permit me to add enough content.