After reading questions and answers on this site and many different tries at solution, I’m unable to edit imported
Files I’ve previously edited successfully. On both apple MacBook running El Capitan (os 10.3.3) and dell running
Windows 10, running lo 6.2, I’ve successfully made small edits to PDF files. These files display properly. But the crossed-arrows MOVE cursor is displayed rather than expected vertical INSERT cursor.
To solve problem, I’ve tried migrating to lo 7. On windows 10, set permissions of all user files to rw, given the
App access to those files.
Should I look for something in system logs or ms registry for a clue? I’ve also followed suggestions from other
Users with respect to their read-only solutions for writer and calc.
One hint as to what’s happening may be when I try to switch modes via ctrl-shift-M I surprised that pop-up box
Appears asking how I want to save the file. But can’t save it, let alone save it under different name to avoid
Saving it read-only.
I’m the only user on the pc, but the only time in many tries I’ve seen .~lock file, I deleted it. But edit still fails.
I’ve also looked at whether macro permissions are causing this, but think this unlikely.
Thanks to the community for considering this. Read-write typo above edited to correct

Set permissions to re? Read and Write should be ticked, not sure what re is, Read and Execute?

On files from another location Windows sometimes sets a new security flag, right click in Explorer, select Properties, in the tab Security if there is an Unblock tick box, then tick it. 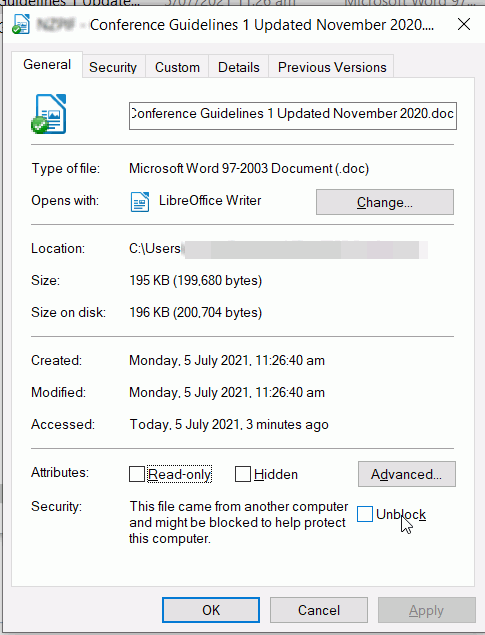 re was a typo should be rw. Also, in 1 try, changed user profile item to FALSE to supress creation of lock file.
Also checked permissions of the scanned file. They are rwxrwxrwx, although not executable.

in properties box, attributes show read-only box is NOT ticked. But I have no unblock box
in the properties, only Attibutes

Windows Defender anti-ransomware blocks access to files, including mapped drives, for untrusted programs on that computer. If that computer is switched off then the network drives are not blocked.

Some third party anti-virus anti-ransomware block the files themselves; if the computer on which the anti-virus is operating is switched off then the files remain blocked

Note that after unblocking files in the anti-virus, the blocking computer might need to be restarted before the block is removed.

The above is from my own observation and frustration. I have not looked into the mechanism by which they are blocked as there was an easy remedy.

I thought I read that you had allowed access to LO in your anti-virus but I don’t see that now.

Ernest Al, your comment about Windows Defender are the way for me to go, I believe. I will try again, as
I recall Windows Defender deferred to McPhee anti-virus and I didn’t pursue the McPhee options fully.
Instead, I called help desk at McPhee but didn’t achieve a soution with them. I need to keep exploring
settings in Win Defender and/or McPhee more diligently. But
Thank you so much, Ernest Al, especially answer to question 313888. I’ll keep working in this vein.

Sorry, another typo. Previous comment should refer to McAfee, not McPhee.

McAfee are not clear on their website, your local help for McAfee should tell you how to unblock file access. The nearest I found was to unblock internet access

Regardless, the file that needs to be unblocked is soffice.bin in the path where it is installed, use question 313888 as a guide

I’ve been able to resolve this issue by properly setting permissions on both the user files
accessed, but also on the folder in which they reside. This may be well-known to Windows
users; I come from unix/linux side. Whether this is a sufficient condition, considering I’ve
earlier eased anti-virus, windows defender safeguards, I’ve not researched.