Type in data in the following cells: 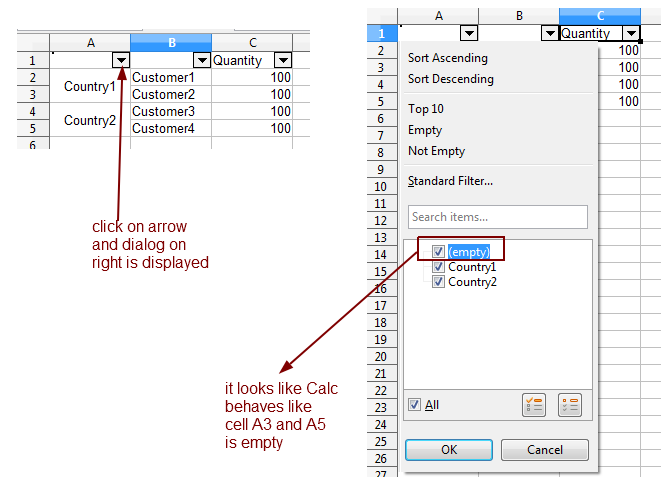 Is there some way to fix this problem?

I can do this manually but it can be a big pain if table is huge:

b) Click on “Merge and Center Cells” to unmerge the cells.

P.S. There may be more then one cells merged it really depends how many customers belongs to particular country in the data I get from my coworkers.

Or we can set formula without function IF() - just =<cell above>. In this case, you need to set the option “Skip empty cells” (many thanks @pierre-yves samyn for this trick!)

Just for fun, another solution with copy-paste & skip empty cells in this video (from 01:00). It is in French, but should be understandable…

@PYS Sorry, but I didn’t see “this video is in French.” But I think I understand what you’re saying. The answer is supplemented with this embodiment

wot video? i see no videos.

Oups… here is the link to the video

You can merge cells or rows or columns values easily using Dose for Excel Add-In:
https://www.zbrainsoft.com/excel-merge.html

strong text> Is there some way to fix this problem?

Yes. Do not merge cells.

Your sheet obviously is thought to keep data in a sense database tables do. Merging cells does not comply with the purpose.

A3 and A5 are empty, aren’t they? Following your description you never entered something there. You may have a wrong understanding of “merging”. The shown cell (topmost leftmost of the “merged range”) occupies an increased area also covering the areas of the cells “merged in”. Thus some logical cells get hidden. They still exist nonetheless in the sense that they can have any content, and they can be referenced. They even can have formats which will get reinstated after a split.

I virtually never merge cells, but if I did I expected exactly the behaviour described. In addition filters do not work with hidden cells, I think. If the software changed the behaviour with this respect, users sharing my expectations surely raised protest.

(Wherever using a table to keep data make sure that every set of data contains the complete information independent of a possible sort order. Databases never regard an order of the underlying data. They “sort on query” if demanded.)

Editing1: To countermand the merging of cells select a range containing the m,erged cells you want to “unmerge” and then going either

Rightclick in the range to get the context menue > 'Split’

I did not configure a toolbar to show the ‘Merge and Centre Cells’ button, but you obviously have, and using it a second time on a range containing merged cells should also split them. (Working like a toggle button if applicable.)

Editing2: (Concerning the second part of the reworked question) See this attached example.

(Sorry! JohnSUN already answered everything. I will not delete this answer nonetheless.)

The problem is, I have written only a sample how to produce a problem. In my case I never do merge, I just get the document already produced in this way by my coworkers and customers and I need to do some analytics on it like filters etc.

I do not know a short solution for the second part. It can be done in a few additional steps using a helper column, however. Maybe someone else hase a more “iconisable” idea. I am not an icon enthusiast.