In Quattro Pro I use \- to mark a line

In Quattro Pro I use \- to mark a line. For counting the lines above and begin again under that line. What can I use in Libre Office Calc?

For counting the lines above

How do you do that? By formula? Selecting with mouse/keyboard?
Please, edit your question to explain a bit more. Thanks.

This question is unclear. Please explain more specifically what you want to achieve.

In Quattro Pro I use {Backslash contained in the title missing here.}- to mark a line. For counting the lines above and ,

Don’t know that software. May I suppose nonetheless that

“counting” here is a failed surrogate for “adding” or “summing”?

If QuattroPro actually creates the respective formula automatically, there is not (and will never be) an equivalent in Calc. You need to create user code to introduce the feature. Howevere, there is the Calc function SUBTOTAL() offering a parameter to declare what’s meant by “total” using a number.

I personally decline subtotals in the column of the addends (or generally original data) for fundamental reasons. However I sometimes dedicate an adjacent column to produce selected subtotals. I never automated that. There are too many variants preferrable under different conditions.
In a playful mood I created an automatism a while ago for the simplest case based on the ContentChanged event. The code is a rather raw sketch.
Since nobody tried an answer yet, I provide it now contained in an example file. It may not be exactly trivial to understand. (The first one of the included helper isn’t used.)
If you actually want to count instead of summing, you need to adapt the code.
See attached example:
autoSubtotalsRight.ods (28.2 KB)

Using shortcut keys Quattro Pro can display keyboard shortcuts beside each menu command in the menu bar. You can disable this feature if you do not

Which shortcut do you mean?

one or more characters 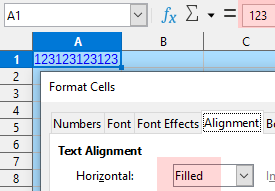 For counting the lines above {emphasis by Lupp} and.-…

Who will count?
If you intend to do that yourself “by eye”, I would suggest to use ConditionalFormatting in Calc. I added the feature to the example by @villeroy and attach the reworked file:
Filled_Style_AndMoreByCF.ods (19.0 KB)
The “borderline above” CF is triggered by a DoubleMinus entered into anmy cell of the CFed range.