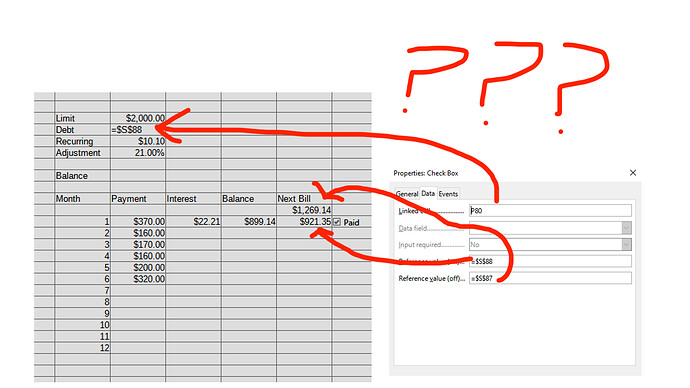 So I’m trying to create a budget setup for paying down a credit card. This is my first attempt at using a spreadsheet but I have the basics sort of…

I’m trying to use a checkbox to change a cell labeled debt (=S87) and convert to another cell (=S88) after making a payment. Making my debt cell change to the paid amount after interest.

Because I’m hyper new I don’t even know if I can use this function to accomplish my goal. I tried searching around but could not find a solution to my problem.

I would appreciate any help and thank you in advance.

I guess I could just manually change the cell after making a payment. But I was looking for a more automatic and robust option.

Please complete your question.
The help on this page is mainly provided by users like you.

Your question and the corresponding description should be as detailed as possible.
Please remember that no one can look over your shoulder when you ask your question and describe it.

In order to be able to help you as quickly as possible, we need to know your operating system and the LibreOffice version (three digits, e.g. 7.3.2).
Please also state the file type in which you have saved your file.

Please do not use answers (solutions) or comments for this.

If you have already fulfilled some of these requirements, so much the better. Thanks.

Upload a reduced and anonymized file here so that someone can examine it.

Here you can find the further References for this page.

Thank you very much for your assistance.

When I created this test sheet I was using the latest version 7.4.3 but because it was crashing nearly constantly I downgraded to version 7.3.7. After the downgrade the program has not crashed once however I was unable to figure out a method to automate when a payment was made. So I opted to just manually update the debt cell without using the checkbox. I thought it was a cool idea but I am still learning. I like to try new things on my own that is not necessarily intended.

As per the request of the latest response I will go into more detail about requested information.

I have already built an entire budget sheet around my idea. It is working great other then the question I had at the top of this thread. It’s a mostly automated budget sheet including bank account balance with income and monthly expenses. Plus it has car payments and credit card payments showing interest and total interest paid over time. I also included a credit utilization graph and a credit score graph. It’s as robust as I was hoping other then the thing I was trying to do with the checkbox.

It seems like this function could work as it does change the cell when you click the checkbox. But instead of switching the cell information it just shows the cell code. So where in the example above I was trying to make a payment of $370 on the balance of $1269.14 and by checking the box was hoping it would apply the payment of $370.00 and chance the balance to $921.35 the bill after the interest charge. But instead of showing the updated balance it shows =S88 and not $921.35

I’m not really making a database but a budget sheet that uses simple math to calculate total after bills, Interest and payment. This is not attempting to call data outside of the sheet.

Simply put values and formulas into cells without any check box.

I have done this and it works great.

I think I simply don’t understand the checkbox data function.

Thanks for the info.