Slides are not showing up in Edit screen!

I have been using Libreoffice since I got my Acer Laptop in about 2017. I like everything about it, having used Word, OpenOffice and Lotus WordPro in the past.

About two years ago I started using Impress to put together talks and classes. It has worked far better than Power Point ever did for me! But recently I have experienced a problem. I have been updating regularly, whenever it is recommended, but I haven’t track of whether this problem first appeared at some update point. It happened first when I made a duplicate of a slide presentation, in order to modify it. All the slides showed up as small icons on the left as usual, but they would not show up in the main editing screen!

I just took the original show and made the modifications and wondered “What was that about!”

Then today I opened a show that I had presented a couple of months ago and the same thing occurred with this program that had been working just fine before!

I noticed that there was an update notice so I rebooted. Updated to Version 6.3.6.2 and held my breath as I opened the show in question. It is still behaving in the same way! Nothing shows up in the main editing screen! It is a blank white screen. No pictures, no text, no nothing! Going from slide to slide in the left hand selector has no effect!

I have lots of updates to add to this show and will be giving our history society a show via Zoom July 25! I want to be ready!

Please see answer by Regina in this post for possible help → PLS HELP! My slides are all white!

This file extension is not allowed so you must rename it after downloading. FixImpress.odt

Rename it to FixImpress.oxt then install it in LO. From menu → Tools->Extension manager... then the add button and locate the renamed extension.

After install, open your problem file (make sure you have a backup in case something goes wrong). Run the macro. From Menu Tools->Macros->Run Macro. In left column under My Macros (expand with double left mouse click or click on leftmost arrow) locate: 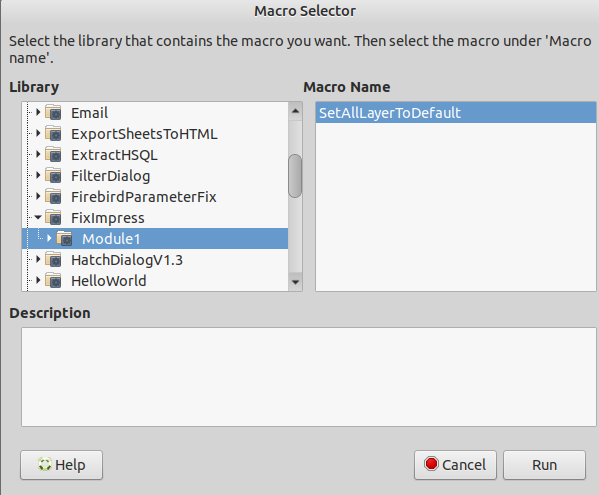 FixImpress folder & expand then click on Module1 folder. In right pane run SetAllLayerToDefault. Once run editing should be good again.

Ratslinger, you are one hard working dude!!! Thanks for all your help. I think even a dummy like me can now figure out what to do. I am just used to working with MicroSoft, etc. and waiting days before anyone gets back!

You are a real tribute to the world of computers! But please take it easy on those rats!!

thanks a lot for sharing.

As with all questions, as you have been helped, please help others to know the question has been answered by clicking on the

in upper left area of answer which satisfied the question.

I don’t see where I click to tag this as resolved!

Found it! Now I’m getting used to the system!