Hanging indents with a paragraph number

I’m trying to find a way to ditch the virtual machine I have to use just to run Word Perfect. There is one feature I desperately need which is Word-Perfect style hanging indents. This means that I can have multiple hanging indents ON ONE LINE, the idea being that I need to produce text formatted like this

where <HI> represents a hanging indent.
(formatting above fixed by ajlittoz)

I have looked at the page explaining hanging indents, and I can see how to do this if I didn’t have the indented paragraph numbering. I can’t see how to do it with the paragraph numbers, which ARE essential, and MUST be indented. Can anyone help me? I absolutely must have this feature before i can dump Word Perfect (which does it just with a simple F7 for each hanging indent, it’s really easy!).

Thanks. SEE NEXT MESSAGE, example text mangled by posting.

The posting process mangled my example

. I’ll repost what I’m looking to achieve with underlines representing the hanging indents.

I see from further posts in this thread that my attempts to simplify things misfired.

Let’s deal with the question about the operating system first - I’m trying to remove the necessity to run a Windows VM for Word Perfect. I’m therefore looking for a word processor which will do what I need and which has a native Linux version. I’m actually running the 64-bit Ubuntu version of Mint 21. By definition, there is no version number of Libre Office because I’m not actually using it yet, the purpose of my question is to try to determine whether I COULD use Libre Office, i.e. does it have the features I need?

Next thing - as I said, I made a mistake by making my example look like a table of contents or similar. The files are actually notes of bridge bidding systems which I am attempting to get into a standard format. So, the outer paragraph number is the first bid, the next one in is the response from partner, the third one is opener’s rebid, etc. The fields I showed as numbers are actually denomination and suit, so not numeric - an accurate example would be more like the following (again, I have used a series of underlines ______ to indicate a hanging indent). I’ve not bothered to fight with the formatter to align subsequent lines of text, they should all be aligned as you would expect for a hanging indent.

Hi, the left paragraph indent is overwritten by the (customized) numbering options.
I am not sure if I have entirely understood your question… 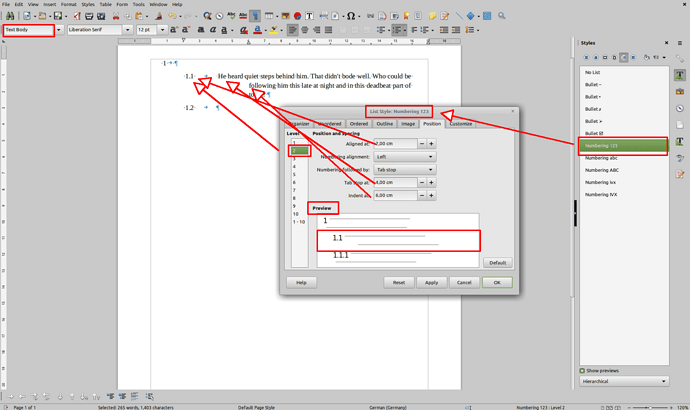 What you want to achieve is done with a paragraph style where you can set left and right indents (called respectively Before text and After text) as “margins” for your paragraph. The first line may be indented differently, either inwards or outwards.

When it comes to a numbered paragraph, the list style defining the properties of the numbering takes over the left indent which must now be tuned in the list style instead of the paragraph style.

Please edit your question to tell us what your numbered paragraphs are. Are they headings (chapter, sub-chapter, …)? Are they items of a numbered list?
This is important because configuration of chapter numbering is not the same as list numbering. There is a dedicated setting for this frequent usage, kind of shortcut.

While you’re at it, mention OS name and LO version. Remember also that Writer features will be guaranteed to be kept only if you save native, i.e. .odt.

Please upload a sample file, if not possible here in the ask site so on an uploader and provide the link for downloading.

I am not sure if I have entirely understood your question…

I need the paragraph numbering to be manually done

In this case, don’t go for a numbered paragraphs. As mentioned above, it is a complex construct involving two style categories. It is quite difficult to tame even for an already skilled user.

In the simplest case, use a hanging indent paragraph with an intermediate tab stop within the indent. See modified built-in Hanging Indent paragraph style in the example file.

However, if your document is made of nested comments, you can’t but use a bulleted list with adequate level-indents. The difficulty is to place two “numbers” on the line. This is solved by a mixed strategy: the list style defines the nesting of the various levels (with no bullet) and the paragraph style adds the intermediate tab stops. See paragraph style BridgeBid.

If you need more than two “numbers” before the comment, add more tab stops in the paragraph style and adjust the indent width in the list style.

This is the example file: LO-HangingIndent.odt (31.1 KB)

Please install LibreOffice, if it is not already preloaded on your Linux install.
Many Linux distributions will have LibreOffice as the default Office suite, and enabled in the basic install.

Open this sample file (15.5 KB). Does it do what you want?
To change the list level of an entry, put the cursor at the very beginning of that entry (before all text on the line starting just right of the number) and push the tab key to level up, or shift+tab to level down.

To achieve this behavior, I used a list style consistent with @ajlittoz’ comment to that effect. See the help section on styles for more info.

The example works correctly, but there still appears to be a residual problem in that the numbers are auto-generated. I need the paragraph numbering to be manually done, because they need to be in terms of bridge bids, i.e. 1C, 1D, 1H, 1S, 1NT and so on.

I think I’m beginning to understand that this is just something which Word Perfect just does SO much better than Libre Office.

Rather than upload a file, as I promised earlier, I can show you through one of the websites what I need to achieve.

I can do this in Word Perfect by sinply using F7 or Alt-F7 to increase or decrease the indentation level. I’m trying to find out whether Libre Office can do the same thing with equal, or at least not much less, facility. If it’s a lot more work than in Word Perfect, then I will just conclude that I have to keep the Windows VM just for running Word Perfect.

I hope this makes it clear (to grantler as well!) exactly what it is I need to do. Thanks to both of you for your attempts to help.

In that case, from my initial suggestion you can alter the list style thus:

Yes, this example does exactly what I need. Thank you! I’ll work through it so I understand it, and then I’ll try working through one of the files with Libre Office rather than Word Perfect. Thanks again for your help!

You would probably want to eventually have that setup of yours as a template.

When you are satisfied with the workings, delete all content and save your file as a template. Then you can create new documents by double click on the template, or make it available as part of the Writer interface as “New file from template”.

See this help page for info about working with templates.