Well, the steps you describe are not detailed enough.

The feature works as expected. Moreover, I have used this feature throughout my admin-times, when I had built a number of templates for my employer that followed quite complicated national standard, that was only possible using “set in body/show in header/footer” fields; and the templates are used since 2007 till today, with a short interruption caused by tdf#60886 you cited, which was successfully resolved.

It is expected and OK; the header takes the data from the first paragraph. It would produce strange and unexpected results if it did otherwise, e.g. for pages with multiple Set Variable fields, where additionally the variable would already have a value set on some previous page. So, if you need to show the variable value in the header, it must be set in the very beginning.

By the way, setting the variable in a text frame allows for creating non-printing frames (which may be set in the frame properties) which allows to use visible field definitions, while not distorting the page text layout (so basically having WYSIWYG). In the frame, you may put multiple paragraphs with variable definitions, and all their values would be visible in header, as long as the frame itself is anchored to the first paragraph.

EDIT 2018-07-17: great you have posted the relevant info! (Which should be the first thing to do anyway.) This is yet another case of using the feature properly, and has nothing to do with tdf#60886.

The problem there is the format of the field. By default, the Set Variable fields have numeric format, so any non-numeric value (like the text “Author”) end up as 0. You need to set variables as text to be able to show them as text.

Go to page 17 of 38 (Page 13), and replace the existing Set Variable field with a new one (you cannot change the field type after creation as far as I know); set the field Format to Text: 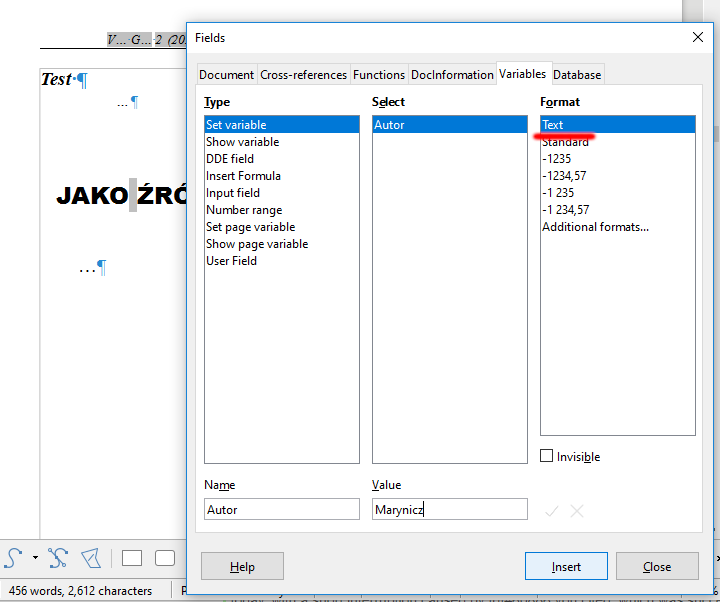 Then re-create the Show Variable field on page 18 of 38 (Page 14), which will get the correct type right away.

The name of the variable is “Autor”. Sorry for my English.

Please move this to the question (edit it), since this is not an answer. Answers should answer original questions.