this posting is very long, sorry, i’d spend the time to pinpoint to the fault (what i consider being a fault) because i think it’s very critical, and i see that former question have been stopped with silly ‘solutions’ or workarounds,

many many thanks in advance to everybody who tries to understand the problem, does further research or gives any other help. i consider ‘press ctrl-shift-F9’ helpful in diagnosis, but not an option for daily work.

shortcut: >>> the shown value of dependent (referencing, calculating) cells is - in some rare cases - NOT! updated as needed / expected when referenced cells (cells that provide ‘source’ for the calculation) are changed <<<

the problem wasted a lot of my time, gave me headaches for more than 6 weeks now, and has the potential to render the work of years worthless.

i’m at the limit what i can do for / against it, so i kindly ask for help …

after deleting the second summand is not! correct, at least not when ‘autocalculate’ is on! 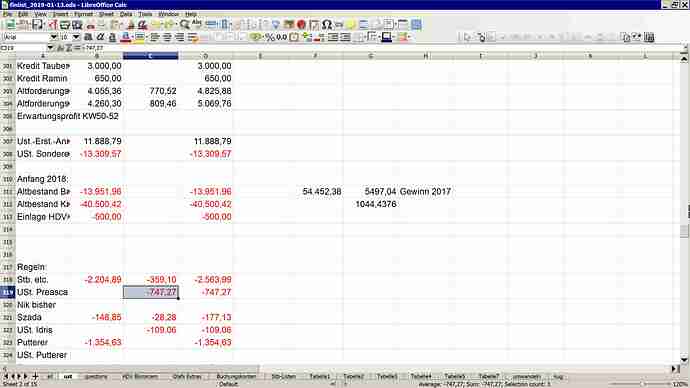 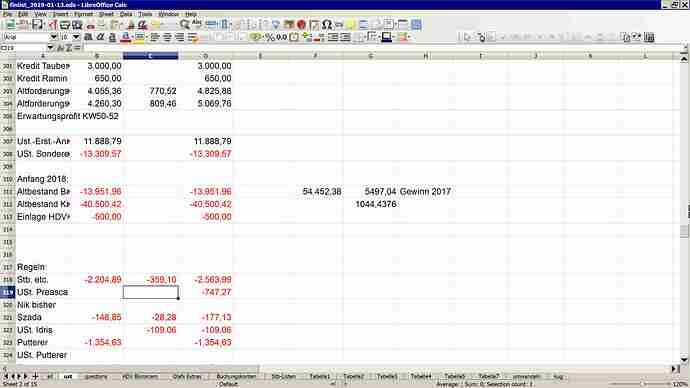 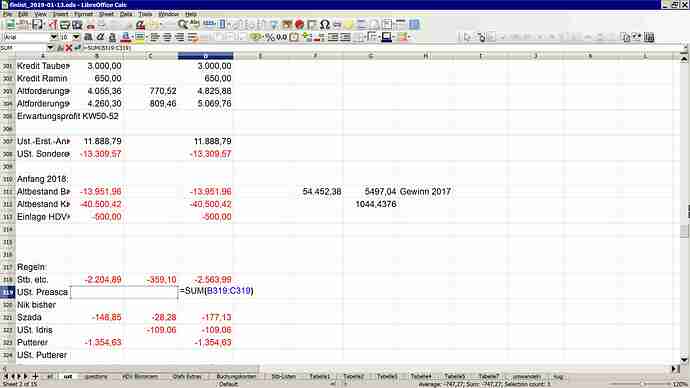 this posting is not! intended to knock LO calc down, it’s intended to catch this problem and get rid of it,

my talent is limited to be able to see a fault when i meet it, and to narrow down the circumstances,

programming is not my thing, at least not in ‘c’, and the time i can throw in is limited,

there is some hope, i found an old version of LO where some of these errors are gone,

hurray!!!, the fact that there are! old versions with different - correct? - behaviour confirms to me that

the ‘error’ is old, it may be more than one error (one can also have loeces and fleas), the unstable results of changing formatting of a cell from ‘all - standard’ to ‘text’ and vice-versa occurs in the old versions were the other problems are ‘gone’,

the impact is near to making calc ununsable because one can’t trust the results,

the same function with the same formatting worked correct in the row below!

after some - random and rare - occurences of similar miscalculations i started research and googling, that brought up some - rare - complaints on the web, from different useres, different versions, different OS’s, different hardware, all having similar problems:

after changes in cells which are referenced by formulas in other cells, the shown value of the dependent cells is not recalculated as neccessary, and that despite the fact that ‘autocalculate’ was on.

the initiating changes could be deleting a cell (not the cell istself but it’s content), undoing a move of cells, changing the formatting (from ‘all - standard’ to ‘text’), and maybee others …

thus it’s difficult for people or programmers to help, most of the complaints where refused ‘you must have made a mistake’, ‘is autocalculate on?’, ‘it’s not a bug, it’s a feature’, and fizzle out ‘just press crtl-shift-F9’,

but to have random results which you can correct by a ‘forced hard recalculation’ makes ‘autocalculate’ a bad joke, is like driving a car where steering and brakes work ‘in most cases’, and should only be allowed when the program starts with a big red warning popup:

‘disclaimer!, warning!, this program is free software and comes ‘as is’ without any warranty. it is known that it produces drastic wrong results in some cases, you may not! trust any results of this calculation sheet unless you have checked them by manual recalculation. please confirm that you’d read and understand this warning, the program won’t start before you accept it. programmers know about this bug but refuse any responsibility’

i think it’s a bug in the part of code where the autocalculation is triggered, maybe related to ‘decisions’ how to handle references when the referenced source is moved (when single cells are addressed the formula in the referencing cell is changed on moves of the referenced cell, when ranges are referenced moving cells within them produces funny results), but that’s just my two cents.

states: ‘All cells are recalculated after a sheet cell has been modified. Any charts in the sheet will also be refreshed.’

obviously that’s not the case - or produces wrong results - in:

I have a time sheet we use to calculate salaries. Sometimes, cells do not recalculate unless deleted and re-entered by hand. It’s quite a difficult one to explain, but I can reproduce it. I have made a video (download warning: 30 MB) that shows what’s happening. UPDATE: I re-recorded the video to fix the audio: I also noticed that the undo function does not undo re-referencing of the cells. These two issues are causing us all sorts of accounting headaches. UPDATE 2: As requested b…

I have been working with a particular spreadsheet for several years now. I use it to track profits of various inventory items. I have several formulas that simply add values from two cells to get a total. These two cells are also simple formulas that add two different cells. It has worked just fine until I upgraded to v 5. Now, the formulas quit working. I have Tools/Cells/Auto-calculate ON. I have Tools/Options/Calc/Formula/Recalculate-on-open ON I have saved as XLS, then re-opened. The XL…

It appears that AutoCalculate stops working when a new column is inserted in a LibreOffice 5.3.0.2 x64 (Windows 10)! To re-enable AutoCalculate, one must close and reopen the document. I ask that you kindly try to reproduce these steps in your installation, to confirm that it is a bug: Start a new spreadsheet and confirm that AutoCalculate is enabled. Type in a number in cell A1. Type in another number in Cell B1. In cell C1 insert the formula =A1+B1. Confirm that the sum in C1 works correctl…

and now, please, help to kill this out, or find where i’m wrong …

many many thanks in advance to everybody who tries to understand the problem, does further research or gives any other help. i consider ‘press ctrl-shift-F9’ helpful in diagnosis, but not an option for daily work.

sorry,
command back,
something is fixed with the patch in dev 6.2.2.0.0,
but other still broken,
i think my impression ‘all fixed’ based on 4.1.6.2 still on my system,
after cleanup and clean install of dev 6.2.2.0.0
the ‘wrong sum after deletion’ occurred again,
also the test provided in Some cells don't recalculate after moving failed,
i created a minimum test sheet and will provide it in another thread

i think that made it,

i’m someway frustrated what some bugs do against the reliability of a software, i’d like to get them killed out as fast as possible,

i see at least two bugs affecting autocalculate and ‘shared formulas’, maybe it’s only one but double faced,

Can auto recalculate be turned off for some cells but not all? English

I have worked out how to turn auto recaculate on and off by using Tools > Cell Content > Autocalculate, but is it possible to turn off autocalc for a single column / single row / single cell on a sheet while keeping it on for the rest of the sheet ?

to be willing to pay 100 EUR to whoever unveils the problem(s) and brings up a solution,